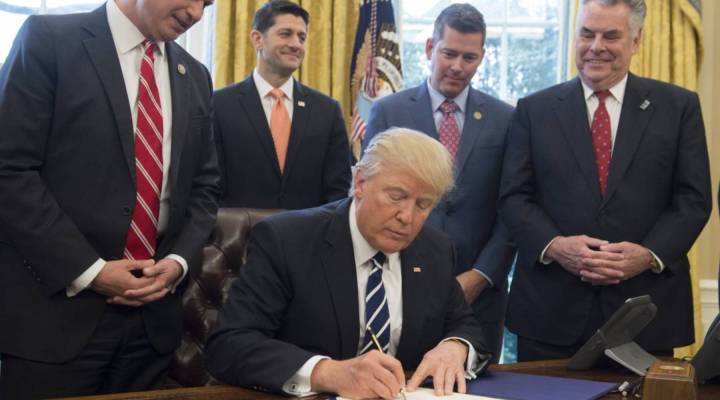 Chris Martin is sitting in his office at the headquarters of Provident Bank, a community bank in New Jersey. There are some paintings and awards on the wall, but otherwise the CEO’s office is sparsely decorated.

“One would say that I’m parsimonious — so that would be that special word for being cheap,” Martin said. “But we’ll spend money to make money.”

What he doesn’t like is spending money complying with the Dodd–Frank Wall Street Reform and Consumer Protection Act, which was passed in 2010.

Martin said he considers most of the rules the bank has to comply with under the law as “busywork.”

For years, the people who run community banks have lobbied Congress for changes to Dodd-Frank. They say the law burdens smaller banks with unnecessary regulation and costs and make it hard for them to make certain loans.

Since the law went into effect, Provident has hired four or five people to make sure the bank is complying with various regulations. And the costs are about to go up because Provident is close to a milestone. It currently has about $9.5 billion in assets. Once a bank reaches the $10 billion mark, it has to follow more rules under Dodd-Frank. Martin won’t say how much compliance has cost so far, but he said the next level of regulations will tack on $6.5 million to $7 million a year.

Community banks say it’s harder for them to bear these costs than it is for big banks.

“To comply with regulation usually involves some fixed costs, like you may need to hire a lawyer,” said Lawrence J. White, an economics professor at New York University Stern School of Business. The smaller the bank, the harder it is to pay that person’s salary.

The total number of banks in the United States has been dropping for decades because of competition and regulation. Community banks argue that Dodd-Frank has contributed to that consolidation.

“What it means is there’s an increased incentive for community banks to merge, particularly when there is a time of succession,” said Wayne Abernathy, executive vice president for financial institutions policy at the American Bankers Association. Abernathy said fewer community banks will mean fewer options for small businesses and people who need loans the big banks aren’t willing to provide.

Community banks made about 8 percent more loans in 2016 than the year before, according to the Federal Deposit Insurance Corp. But Abernathy says the regulation is stopping them from making loans to people who don’t fit a certain mold.

“They’re making loans to their best customers,” Abernathy said. “That’s what the regulators basically will allow them to do. They’re less able to make loans to the new firm, to somebody whose credit is not sterling.”

Some bankers say that’s the point.

The headquarters of Amalgamated Bank, a community bank with $4 billion in commercial assets, is on Seventh Avenue in Manhattan, on a block where the footprint of trillion-dollar banks is everywhere. There’s a TD Bank, a Bank of America, even a Citibike bike-share station around the corner.

“Let’s remember, in 2008, part of this was a mortgage crisis that was caused by a lot of people being able to borrow money when they were not really qualified to do it,” said Keith Mestrich, Amalgamated’s CEO. “And I think Dodd-Frank has done a good job of protecting against those kinds of abuses.”

Because of Dodd-Frank, the bank has more money set aside so it can withstand shocks to the economy, Mestrich said. “I think it means that we have slowed down, that we have taken the precautions to make sure that we don’t do the riskiest kinds of loans,” he said.

It’s unclear exactly what Dodd-Frank reform for community banks would look like.

Republican lawmakers have proposed changing some rules so they don’t apply to smaller banks. But it may be hard to get support from Democrats, who might worry that’ll open the door to reforms for the big banks, said Elizabeth Sanders, a professor of government at Cornell. “A lot of people who believe in regulation are going to be scared, and they’re going to think, ‘Well, better just to obstruct that.’”

With a Republican majority in Congress, those changes could happen anyway.