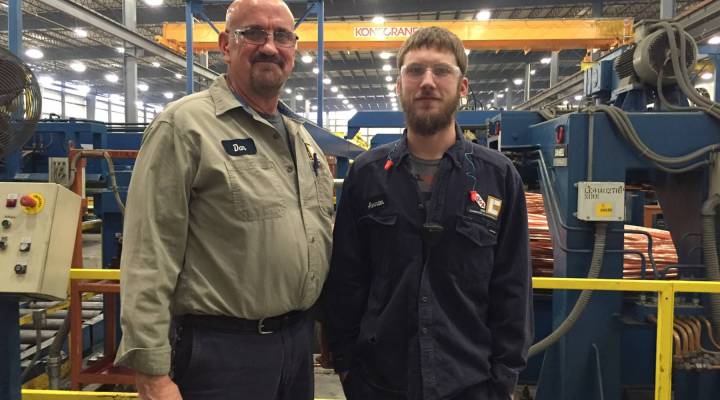 COPY
Daniel Waller (left) is manager of maintenance systems at Cambridge-Lee Industries in Reading, Pa. With more employees like Waller, 63, nearing retirement, the company is training workers like Alexander Jones, 23, to replace them. Amy Scott/Marketplace

Daniel Waller (left) is manager of maintenance systems at Cambridge-Lee Industries in Reading, Pa. With more employees like Waller, 63, nearing retirement, the company is training workers like Alexander Jones, 23, to replace them. Amy Scott/Marketplace
Listen Now

Inside a cavernous building, solid bars of copper are heated and stretched into miles and miles of shiny tubing. This is Cambridge-Lee Industries, in Reading, Pennsylvania. For nearly 75 years, this plant on the Schuylkill River has produced copper tubing, mostly for plumbing, heating and refrigeration.

“Across the United States, Cambridge-Lee copper tubing’s in just about one of every four homes,” said Mike Fischetti, the company’s new vice president of human resources.

Fischetti is facing a challenge a lot of manufacturers in the area have: an aging workforce. During the long manufacturing downturn in the 1990s and 2000s, the factories that survived had no trouble finding skilled workers, he said, and many didn’t invest in training younger ones.

“Over time that has now hurt our organization, where we have a population that are very far along in their career that are really good,” he said, “but we have this population that we recruited but we never developed.”

With the economy growing and about a quarter of the area’s manufacturing workforce set to retire in the next 10 years, employers like Cambridge-Lee now find themselves scrambling for skilled workers. At the same time, manufacturing technology has become more sophisticated, requiring more advanced skills. According to the National Skills Coalition, about half of jobs today require education beyond high school but less than a four-year degree.

Before Fischetti arrived, Cambridge-Lee did offer help with training, he said, if employees wanted to do it on their own.

“We said, ‘If you want to increase your skillset, pick a class, pay for it, go to it. If you pass, we’ll reimburse you,’” he said. “So I asked, ‘How effective was that? How many people did that?’ And the answer was none.”

Why would they go to class in their spare time, he said, when they were working 60 or 70 hours a week? So Fischetti started a new program to send workers to Reading Area Community College. One day a week, they work a half shift and then spend the rest of the day in class, learning how to troubleshoot and repair mechanical breakdowns. The company pays them for their time and travel, and covers the tuition.

In one of the plant’s newer buildings, workers unspool shiny copper tubing from giant coils and cut it into long sections. One of the trainees, Alexander Jones, 23, is in charge of making sure the machines keep running properly.

“Today I’ve been called over here twice already, for just little stuff,” he said. “With the add-on of this machine, it’s going to be a little different.”

The new machine he mentioned will cut sections of tubing automatically to more precise lengths. That takes more sophisticated skills to maintain. In class, Jones is learning how mechanical and hydraulic systems work.

“Now I’m able to understand it a lot quicker and diagnose the issues a lot quicker, which, you know, relates to less downtime for machines,” he said.

Those skills could also lead to a few dollars an hour more in pay. The training isn’t cheap. It’ll cost about $62,000 for the first crop of 16 workers, but Cambridge-Lee will be reimbursed more than half of that with state and federal funds. The company is one of about 20 local employers receiving funding through the Berks County Workforce Development Board to train existing workers.

For most companies, their workers’ skills are their most important asset, said Fred Dedrick, CEO of the National Fund for Workforce Solutions, which promotes partnerships between industry and educators.

“Without them being highly skilled, they will go out of business,” he said. “That’s what’s different about advanced manufacturing. You cannot be successful unless you have highly skilled employees.”

There’s always a risk those skills will walk out the door. But Cambridge-Lee’s Mike Fischetti said he believes investing in workers will make them want to stay. And just in case, he has an insurance policy. If workers pass the training and leave within two years, they’re on the hook for some of the cost.