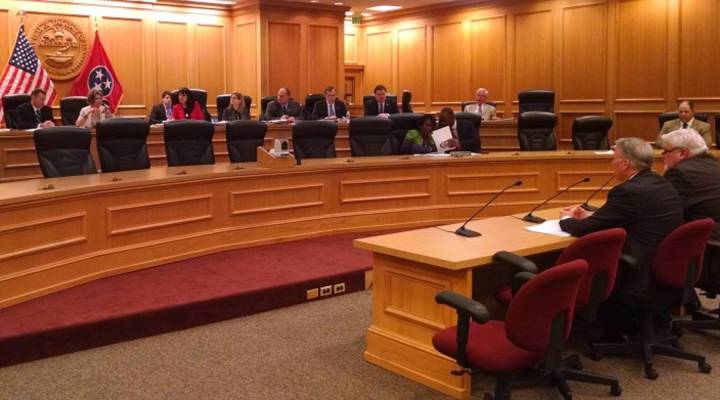 COPY
A panel in the Tennessee House of Representatives opens debate over a proposal to raise the state's gas tax by 7 cents a gallon.  Chas Sisk/Nashville Public Radio

A panel in the Tennessee House of Representatives opens debate over a proposal to raise the state's gas tax by 7 cents a gallon.  Chas Sisk/Nashville Public Radio
Listen Now

Nashville, Tennessee, is growing fast. As many as 85 people a day move into the city and its suburbs. That’s meant congestion, deteriorating roads and scores of overstressed bridges.

So some say this is a good time to raise Tennessee’s gas tax, the 10th-lowest in the nation. But not Tricia Stickel, president of the Maury County Tea Party.

“I’ve lived in seven different states,” she said at a recent meeting. “I think we have excellent roads.”

Stickel lives in Columbia, an hour south of Nashville and the seat of Maury County. Even here, the effects of growth can be felt. Stickel notes that two bridges in the county have been shut down among the eight the Tennessee Department of Transportation has closed because they can no longer bear the weight of heavy vehicles. There are also frequent traffic jams in Spring Hill, a fast-growing community on the county’s northern border.

But Stickel and her husband used to own a trucking company in Nevada. That taught her a gas tax hike doesn’t stop at the pump. It’ll trickle across the economy through higher prices, and that’ll also mean a higher sales tax on those goods, she said.

“Consider all the food in your grocery store,” she said. “This is a double whammy…. Every good in that store will be increased, and they’ll get the tax on that.”

More than a dozen states are weighing increases to their taxes on diesel and gasoline, according to the National Conference of State Legislatures. There’s a widespread belief that more efficient vehicles are leaving highways underfunded.

But it’s still a tough sell, even in states that haven’t increased their gas taxes in decades, like Tennessee.

Gov. Bill Haslam has proposed raising Tennessee’s 21.4 cent gas tax by 7 cents a gallon. He also wants to raise its 17 cent tax on diesel by 12 cents.

It would be the state’s first increase since 1989. Only four states have gone longer: Alaska, Oklahoma, South Carolina and Mississippi. And they’ve also weighed hikes this year.

Support for the tax has come from local mayors, business groups, manufacturers and the state’s fast-growing logistics industry. Nashville trucking executive David Manning supports an increase, even though it would mean spending more on fuel.

A recent study by the American Transportation Research Institute shows Tennessee has four of the 50 worst bottlenecks in the country.

Haslam has offered to cut the state’s sales tax on food, speed up the planned elimination of its tax on investment income and rework its inventory tax for the benefit of manufacturers. He’s been aided by a billion-dollar budget surplus.

Still small-government groups like Americans for Prosperity are fighting the plan. And state lawmakers have offered counterproposals.

“I just think that’s just the reality,” he said. “We live in a state that is very conservative about how we spend money and how we do taxes.”

That conservatism may wind up sinking a gas tax hike in Tennessee once more.