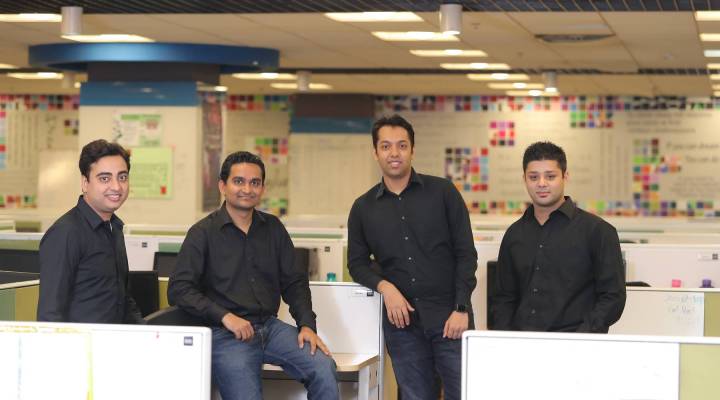 COPY
From left to right, Faisal Abidi, Raghib Khan, Imran Ali and Nitish Sood. Executives Ali and Sood traveled to the U.S. last year to apply for L-1 visas and open a branch of their company, RNF Technologies. Photo courtesy of Imran Ali
The Big Promise

Last month, several news outlets reported on a leaked draft executive order that could affect the program along with several lesser-known visas. One of those other visas is the L-1. You can think of it as a cousin to the H-1B. It allows multinational companies to transfer their employees to U.S. branches. It also gives foreign executives the permission to build a branch in the states, which is what Indian business partners Imran Ali and Nitish Sood are trying to do.

Just over a year ago, the two young executives were working at RNF Technologies, a web and mobile app company in Bangalore, the Silicon Valley of India, when they made the decision to expand to the U.S.

“California was, of course, an obvious choice — the sixth, seventh largest economy in the world by GDP,” said Sood, associate vice president. “And [it’s] primarily a tech-oriented state, so it only made sense for us to be here.”

So Sood and Ali pulled together their business plan, booked their tickets and headed to Los Angeles. They were feeling pretty good about things until they landed in Dubai, where they were greeted by the sight of a plane that had skidded off the runway and caught fire.

“We looked at each other and said, ‘Maybe it’s not the best idea to be taking a flight to the U.S. right now. Maybe this is nature and God telling us a different path to take,” said Ali, vice president of sales and marketing.

But they made it to L.A. and began putting together their application for an L-1 visa, which would allow them to set up a branch and work in California for up to seven years.

“It is definitely a very, very cumbersome process,” Ali said. “Our application alone just for each person was about 900 odd pages.”

About 100 of those pages consisted solely of their five-year business plan. And just to prove they’re really serious, they needed to show a couple hundred thousand dollars in the bank and a lease on office space.

To get an L-1 visa, you practically have to start setting up a business before you even apply, said John Khosravi, an immigration lawyer in Los Angeles.

“It’s a gamble because you could invest all this money and you get denied, and all of a sudden you’re out the money and your investment,” Khosravi explained.

“I think the whole immigration system is completely unknown to the general public,” Khosravi said.

There’s a whole alphabet soup of visas, like H-1C visas for nurses in shortage areas, P-1s for athletes and O-1s for people with extraordinary skills in subjects like art or science. Hundreds of thousands of employment-based visas are issued each year. But the Trump administration’s draft executive order on foreign workers could put limitations on some of those visas.

“What those limitations will look like, we don’t really know,” said Scott McVarish, managing attorney of the Immigration Law Office of Los Angeles.

McVarish said what we do know is the administration has said it wants to prioritize the interests of American workers — their jobs, wages and well-being.

According to the leaked draft, that could mean more site visits at companies using L-1 visas. It could also mean reforms to the J-1 for summer workers and the E-2 for new ventures.

For business, all of the uncertainty “becomes part of their calculation, and I think companies that want to be conservative about things will simply not come here,” McVarish said.

That said, there is acknowledgement that reforms are needed in some visa programs.

“There’s been just countless cases of labor trafficking and worker abuse and workers not being paid the wages they’re supposed to be paid,” said Daniel Costa, director of immigration law and policy research at Economic Policy Institute.

Costa said a better approach would be to get rid of temporary visas altogether and only bring in foreign workers to fill labor shortages.

“You wouldn’t keep them on a temporary status for very long,” he suggested. “You’d put them on a quick path to residence and citizenship.”

Sood and Ali, the Indian business partners, aren’t concerned with that now. They’re focused on expanding as their business plan calls for hiring hundreds of U.S. workers over the next few years.

“Things have, you know, gotten easier for us in terms of being able to grow,” Ali said. “And being physically present in the U.S. is literally just going to put things on steroid mode.”

That is, once they get the green light on their L-1 visas.