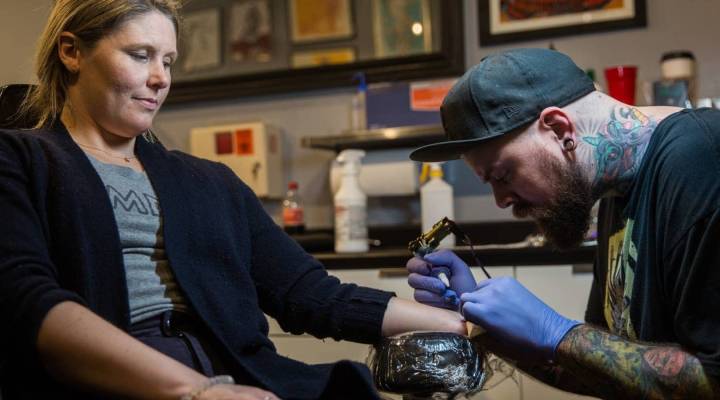 This story first appeared on mprnews.org

The Brass Knuckle Tattoo Studio in Minneapolis was wall-to-wall with people Tuesday afternoon, as more than 100 women packed in for appointments.

They were all there to get the same tattoo: “Nevertheless she persisted.”

The phrase was first uttered earlier this month by Republican Sen. Mitch McConnell — but its meaning has since spun far out of his control. He said it after a Senate session discussing the Jeff Sessions’ nomination for attorney general, when Sen. Elizabeth Warren was formally silenced for reading a letter by Coretta Scott King.

McConnell said, at the time, “She was warned. She was given an explanation. Nevertheless, she persisted.”

Overnight, the phrase became a rallying cry for Warren’s supporters and proponents of women’s rights. It exploded on Twitter, as women shared their stories of “persisting” in the face of discrimination and sexism.

They were words Kate O’Reilly wanted to remember. She emailed a graphic designer friend, Chelsea Brink, to ask if she could turn the words into a tattoo design.

“It’s the first tattoo I’ve ever considered,” O’Reilly said. “I like the idea of flipping it around and using it in a way he didn’t intend for us to.”

O’Reilly wasn’t the only one with the idea. Nora McInerny, a Minneapolis writer, also emailed Brink asking for a “persisted” design. Together, the three turned it into a fundraiser and posted the event to Facebook.

Brass Knuckle tattoo artist Emily Snow agreed to donate her time. For $75, people could get the simple tattoo in black ink, with proceeds going to Women Winning, a group aimed at, in their words, “building a statewide movement dedicated to increasing pro-choice women’s representation at all levels of office.”

They thought it would be a small event with maybe a handful of friends. Instead, hundreds showed up. Within an hour, they were turning people away. Two additional tattoo artists came in on their days off to help. The line stretched out the door. Girl Scouts took advantage, hawking cookies to the crowd.

At 54, and only slightly nervous, Mary Beth Settergren got her first tattoo.

“I was never planning on it. I couldn’t think of anything that, even at my age, I would want on my body for the rest of my life,” Settergren said.

But after watching the phrase fill the headlines, and seeing the event on Facebook, she thought: “Maybe.” Then her 19-year-old daughter cheered her on.

At Brass Knuckle, she stretched out her left forearm for the tattoo artist.

She wanted the phrase on her arm “so I can look at it. Because I think that it’s really an encouraging message for women to persist, no matter what. I think it speaks to the challenges I’ve faced in my life.”

In the chair next to Settergren, 28-year-old Allison Stambaugh was getting her finished tattoo wrapped up as her sister, Sara, waited to take her place.

They came together, for moral support.

“It’s important to me because I feel like women’s rights are being tested right now,” Allison said. “This is a really nice way of showing people that I stand with other women.”

Sara, 31, agreed. “I have a seven-month-old daughter,” Sara said. “And I want her to grow up knowing she can do just about anything, as long as she sets her mind to it and keeps persisting.”

Brink’s design of “nevertheless she persisted” has now spread farther than the forearms and ankles and feet of Minneapolis. O’Reilly got an email from a woman in Portland, Ore., asking if she could use the design for a tattoo. Brink agreed, asking her to make a donation to a charity of her choice.

“It’s surreal,” Brink said, of how the design has taken off.