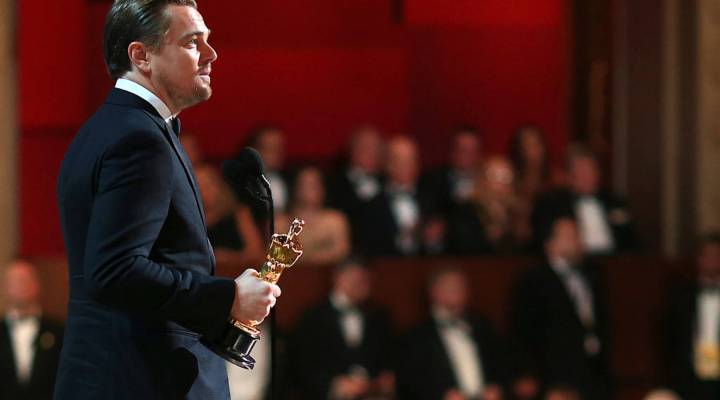 COPY
Leonardo DiCaprio accepts the Academy Award for Best Actor for his role in the "The Revenant." Christopher Polk/Getty Images

Leonardo DiCaprio accepts the Academy Award for Best Actor for his role in the "The Revenant." Christopher Polk/Getty Images
Listen Now

Last year, the Oscars tried a thank you scroll along the bottom of the screen to encourage winners to move away from deadly boring, breathless-stream-of-appreciation speeches.

But this year, we might finally get something different.

“I have never seen actors and artists be so engaged in politics and want to speak out,” said Justin Mikita. He and his business partner, Todd Hawkins, connect celebrities to social causes through their company Hawkins Mikita.

Since the election, they said their phone has been ringing and ringing and ringing. Celebs want a cause. They want to help change things. But the causes they choose to champion aren’t just a matter of what’s tugging at their heartstrings that day. For many, it’s a well-considered business decision.

The first step, Mikita said, is understanding what the celebrity is passionate about. Then, Hawkins said, they have to really consider the brand. You don’t want a cause that’ll alienate the fans. After that, they try to find a cause that’ll resonate with their audience.

“It’s about using that platform and leveraging that platform in a way that makes sense,” Hawkins said. (Trying to rally a bunch of teenage fans around Social Security reform might be a tough sell.)

Sometimes the trick is getting a celebrity client to home in on just one thing.

“As a brand, you need to make sure you are focused and that fans understand your message,” Makita said.

If a pairing works, it can be good business for both.

“Celebrities give causes exposure,”said Jo Piazza, author of “Celebrity, Inc.” “And causes give celebrities their humanity and likeability.”