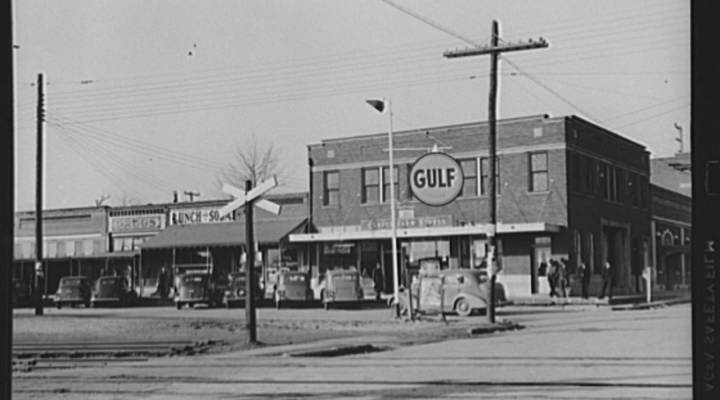 President Donald Trump has pledged to “revive” the coal industry and deliver the next industry boom. But for historic coal-mining towns, many are asking a broader, long-term question: In volatile resource economies, do the periodic booms get outweighed by the busts that follow? In other words, do the hangovers last longer than the parties?

On its face, it seems a ridiculous question: Can a natural resource be bad for a local economy?

“Without a drop of coal here, we would have been better off, because we would have had productive corn ground, soybean ground,” said longtime Rocky Branch, Illinois, resident and retiree Judy Kellen, who lives next door to the Rocky Run surface mine. “We’re not going to have productive nothing here. It won’t be until the Lord come back.”

Every day, Kellen hears the roar of trucks driving back and forth to the mine. She said an out-of-town mining company tore up her flat farmland and left it hilly and bumpy.

“You can’t drive a tractor uphill,” she added.

Kellen comes from a mining family and said dissing coal in these parts is tantamount to “dissing your grandfather.” But to her, all the blasting and the digging from coal companies have wrecked the area’s farming soil for good.

“Them,” as in coal companies.

In energy economics, a the term “resource curse” tries to understand why so many places rich in oil or coal turn out to be poor. That is the case in the southern tip of Illinois, where incomes and education levels are lower than the rest of the state, and poverty rates are higher. These are towns geologically and literally built on coal — towns like Carbondale and Glen Carbon that sprung up generations ago, when immigrants came from Eastern Europe to swing pick axes and shovel coal. But fossil fuel prices have always swung violently up and down. Now, U.S. coal production is at a four-decade low, and in the current bust many are wondering if the promise of periodic booms have really been worth it.

“That’s part of the myth I grew up believing about coal, that there was strictly an upside in terms of the jobs,” said Sam Stearns, a local resident and environmental activist. “And I had no idea about what some of the downsides were.”

Scholars who study the phenomenon of resource curse, a subject of continuous empirical debate, point to a common downside: Fossil fuel production often crowds out other economic sectors, resulting in a lack of economic diversity. In good times, demand for workers pushes wages up to sky high levels, potentially scaring away other employers (factories, for instance) from moving in. Then in downturns, fossil fuel economies can crash hard and have insufficient public money to invest in new sectors.

“I would like to see these moonscape-looking lands covered with solar panels and windmills,” Stearns said. “But right now, young folks don’t have good prospects here for jobs.”

It’s not a given that a resource equals a curse, scholars have noted. One way out of it is to tax the mining or drilling sectors and use the revenue to invest in roads or education, diversifying a local economy. Illinois doesn’t have one of those taxes.

Another solution: Retrain workers for something else. But at a local Italian restaurant in Saline County’s city of Harrisburg, Morello’s, retraining does not sound very common. Statewide, coal jobs have fallen by two-thirds in a generation.

“They’re like, ‘School ain’t for me,’” bartender Michael Thomas said, giving his description of a typical jobless coal miner. “’I’m a hard worker. I’m a laborer. This is what I do. Books are not for me.’”

These miners historically were the proverbial “big men on campus,” Thomas said. They were proud men with an appetite for risky jobs and a penchant for fancy trucks.

“Big F-150s, new motorcycles. They got boats,” Thomas said. “And now that the mine is gone, you’re starting to see a lot of people starting to pull back from that. You were on the starting five of the team, and now you’re just sitting the bench. Hoping to get off the bench.”

And yet the dream of coal mining remains.

“My dad begged me all the time when I was little not to be a coal miner, but that’s all I wanted to do,” said Ethan Dudley, Morello’s delivery man, who is completing a degree in diesel technology at a nearby community college. “Because I’ve seen my dad do it. I know it’s dangerous. But I still want to do it, yeah.”

To be sure, some coal jobs could return under the Trump administration, which has pledged to roll back regulations on coal mines and coal-burning power plants. But this is what Dudley is up against: Technology is replacing workers, and other energy sources, including renewables and natural gas, are nudging out coal.

All this could make for an ungraceful decline for historic coal towns. It wouldn’t be the first time.

“This is where I got a haircut every Saturday. I remember when there were three barbershops in town,” said Sam Stearns, driving through the once-thriving coal mining town of Carrier Mills, Illinois.

But the local mine closed a few years ago, and now the town is nearly empty.

“All these big concrete pads you see, these concrete pads were businesses. This land has all been undermined here, and it couldn’t even support the brick buildings.”