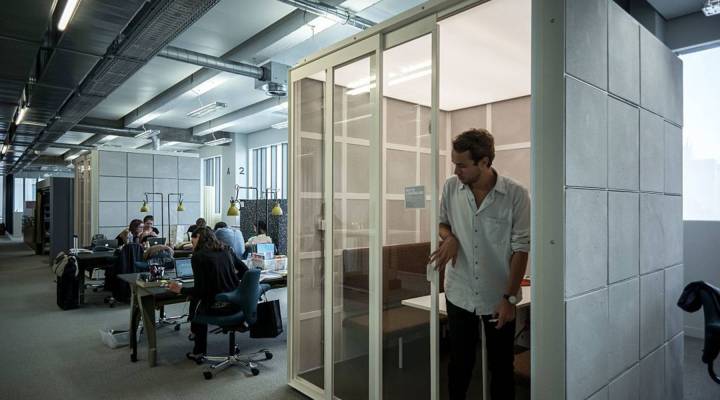 COPY
Employers "can monitor workers all the way up until the bathroom," says workplace reporter Rebecca Greenfield. PHILIPPE LOPEZ/AFP/Getty Images

We all know about the sensors that turn the lights off when a room isn’t occupied or dial back the air conditioning when it isn’t needed. But in today’s modern workplace, sensors are capable of tracking much more, including how long employees go without talking with one another, and, in one case, even when workers are away from their desks.

Rebecca Greenfield covers the workplace for Bloomberg. Marketplace host Kai Ryssdal spoke with Greenfield about her recent piece on office sensors and why privacy at work is so elusive. Below is an edited transcript of their conversation.

Kai Ryssdal: So I need you to tell me about OccupEye — and it’s e-y-e at the end. What is that?

Rebecca Greenfield: Yeah, OccupEye is an unfortunate name for this device. But about a year ago, journalists at the British newspaper The Telegraph came into their office and there were these black boxes under each of their desks to monitor if the reporters were at their desks or not at their desks. And the reporters understandably freaked out because they were worried that their bosses were basically keeping tabs on them … and less than a day later, HR had taken the boxes away.

Ryssdal: It is, though, a little bit of the monitoring society, right? I mean, “You have no privacy, get over it.” And now it’s in the workplace in a very tangible way.

Greenfield: Yeah. Even though these employees successfully got rid of these boxes, there are sensors all over workplaces everywhere tracking all sorts of things.

Ryssdal: Tell me about this company called Enlighted.

Greenfield: Yeah, so they make sensors of the lighting type and the energy efficiency control type. And their sensors are pretty inconspicuous. So you walk into an office building, and you won’t even notice they’re there. So I was at this design firm, Gensler, and they have about 1,000 of these Enlighted sensors in their office, but they’re about the size of a dime, and they’re just embedded in the lights so you don’t even notice it.

Ryssdal: The company says they can sorta track how long employees go without talking to each other?

Greenfield: So that’s another company called Humanyze. They’re Boston-based, and their sensors are a little more noticeable. They’re in a badge you wear around [your] neck, kind of like an ID badge. And they measure this thing called “latency” to see how often people are interacting with their co-workers. Which, to me, sounds like a little bit much. But they claim the data is anonymized, and they don’t record exactly what you’re saying, or at least they don’t share that with your employer…. The Boston Consulting Group is using it to see how their design might encourage employee interactions. You know, they want their employees to be talking to each other a lot. They have all these theories about how that’s better for creativity and innovation. So they think that they can use these sensors to better design their space.

Ryssdal: You point out in your piece — and this is important to realize — “Legally speaking, U.S. businesses are within their rights to go full-on Eye of Sauron.” That is to say, you’ve got no privacy rights in a modern office.

Greenfield: Basically, someone told me that they can monitor workers all the way up until the bathroom. You have no rights. Which you should know about your digital communications too. Basically, anything you do in the workplace, it’s kind of your employer’s business…. So as a workplace reporter, I’m not going to kid myself.