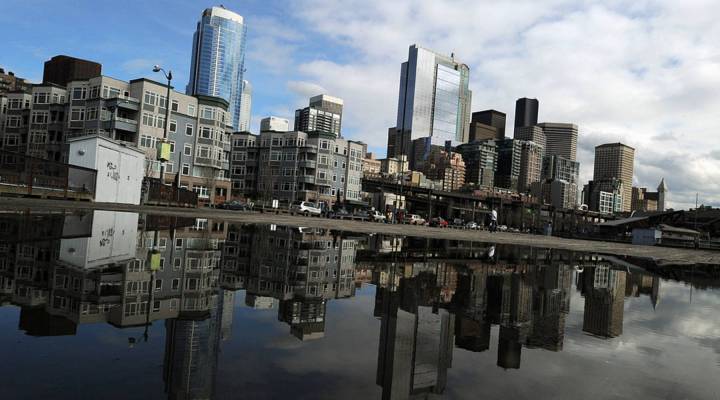 The city of Seattle is trying out a campaign finance experiment in city elections using a voucher system to give money to candidates.

In January, residents received four $25 vouchers, paid for with taxpayer funds, that they can give to their candidates of choice for offices such as city council.

“It was like getting a little check from your grandma,” Seattle resident Dakota Solberg said of the dark blue slips of paper that arrived in his mailbox recently.

Unlike a check from Grandma, the vouchers, totaling $100, can only be spent on candidates for Seattle offices. Solberg said he has never contributed to local races before.

“This feels like just extra money that I can use to start participating more,” he said.

Seattle residents are getting $100 in vouchers that they can spend on city candidates of their choice. The slips of paper are called democracy vouchers.

Solberg said he hopes others get more involved too. Around 1 percent of Seattle adults contribute to local politics. In 2015 voters overwhelmingly approved a campaign finance reform ballot measure creating the democracy voucher program.

“Really, the intent behind it was to get people involved who have not ever made a contribution to a city candidate,” said Wayne Barnett, executive director of the Seattle Ethics and Elections Commission, which runs the program.

The program also aims to encourage candidacy by people who couldn’t raise enough money to run otherwise. The city is spreading the word through mailers in 14 languages and radio spots. Seattle residents send the vouchers to their favorite candidates, who can only redeem them if they abide by spending limits.

The program is funded through property taxes. In all, the city budgets $3 million a year for vouchers, but that doesn’t include administrative costs, such as salaries for city employees, mailing and printing costs, said Robert Mahon, former chair of the Seattle Ethics and Elections Commission. Mahon opposed the initiative, in part, because he said it costs taxpayers 50 cents in overhead for every dollar in vouchers.

“You weigh that against the benefits, and I think the benefits are probably very slight if any,” he said. Seattle city races were already competitive, Mahon said, adding that he suspects people who aren’t politically aware won’t be pulled in.

Seattle resident Patrick Gbagonah threw his vouchers away because he said he’s fed up with politics and doesn’t vote.

“I don’t need them,” Gbagonah said.

Other Seattle residents have already started using their vouchers for the August primary. They have until November to send them in.