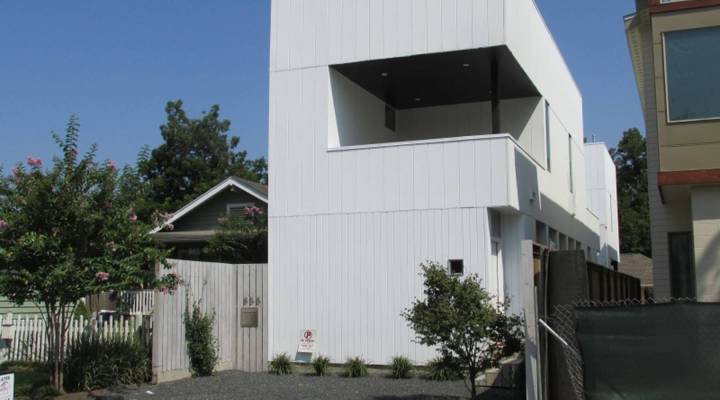 COPY
Lydia Afeman’s townhouse in Houston is flexible on the inside, to allow for short or long-term paying guests.  Florian Martin

Lydia Afeman’s townhouse in Houston is flexible on the inside, to allow for short or long-term paying guests.  Florian Martin
Listen Now

Home sharing through websites like Airbnb has become increasingly popular and can give hosts some cash on the side. In Houston, Lydia Afeman has come up with an architectural design for her townhome that takes the concept further: It aims to make her house easier to divide, so that sharing can become a steady source of income.

It’s a two-story building that looks pretty plain from the outside — it’s a white rectangle without many windows. But it’s what’s inside that makes this home special.

“You could easily just shut one unit off or you could leave it all open if you don’t have a guest,” Afeman explained while giving a tour of  her place. “But when you do, you can just have your privacy.”

Lydia Afeman eventually plans to sell her house in Houston and build another multi-unit home.

For about $570,000, including the land, Afeman had her townhome custom made to host short-term guests (like a hotel) or long-term guests (like corporate housing). It has three separate units, each with a kitchen and bathroom. The homeowner or primary renter is meant to occupy the larger first floor.

Afeman is hoping to build more homes to sell to other potential hosts.

Steven Barth thinks it’s a good business model. The professor of hospitality law at the University of Houston said the concept could take away more business from hotels “because people have decided it’s more comfortable to be in an apartment-style, condo-style thing.” But he said there are a few things that professional home sharers have to be aware of.

“Well, first thing you’d want to do is first of all make sure it’s legal,” he said. That means hosts need to comply with any city regulations or homeowners association rules. For example, he said, hosts should consider whether they need to pay hotel occupancy taxes. Barth said many Airbnb hosts can make the argument that they are only renting out their homes occasionally.

“Well, in this model that they’re designing and building specifically for that concept, it’d be very hard to make that argument that you’re not subject to those taxes,” he said. Also, homeowners’ insurance may have to be adjusted to include temporary guests.

Afeman paid for a feasibility study that concluded the concept could make her money while she sleeps, assuming there’s an 88 percent occupancy rate throughout the year.