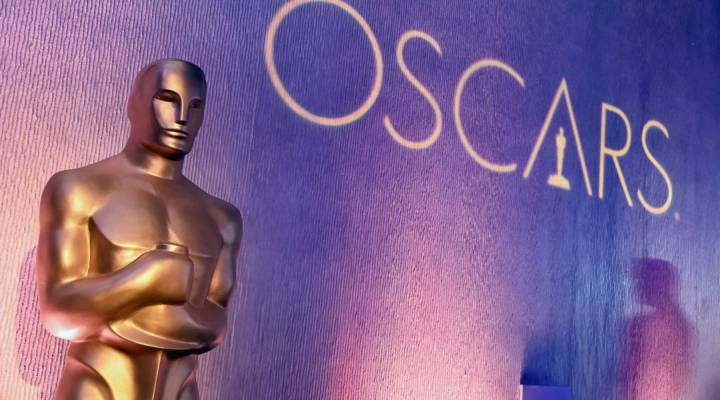 In front of the Dolby Theater (formerly Kodak) on Hollywood Boulevard, preparations for the Oscars have already begun. The award show airs Sunday and it’s a night when the Academy of Motion Picture Arts and Sciences celebrates the best filmmakers and actors of the year. One of the people behind the ceremony who won’t be accepting an award that evening is Mike De Luca. He, along with Jennifer Todd, is producing the awards show this year.

Marketplace Host Adriene Hill sat down with him to talk about what it takes to produce the biggest night in Hollywood, and how the nation’s politics may make an appearance. Below is an edited transcription of their conversation.

Mike De Luca: We’re in a dressing room in the Dolby Theater — these are kind of our temporary offices. We’ve taken over the dressing rooms and we’ll be here kind of encamped until show time.

Adriene Hill:  Tell me what the producer of the Oscars does. What’s that job look like?

De Luca: The first thing you do is kind of pitch an over-arching theme or you know kind of a story you want to tell that’s threaded through that through the show—

Hill: To the academy to the network?

De Luca: To the Academy, and then eventually you meet with the network and they check in periodically. We started getting together in September and October, probably October — there’s only so much you can do pre-nominations, but you know, you start lining up your wish list of presenters and then things really kick into high gear the day after the nominations are announced when you know what you’re dealing with.

Hill: You’re starting to conceive of this back in September/October. At that point this country sort of thinks it knows where the election’s going. All of the sudden you have a surprise and then you have these awards shows sort of taking on a whole new tone and a whole new meaning. How is that sort of factored into this Oscars?

De Luca: We’ve tried to be completely political-free zone in terms of conceptualizing the show. Jen [Todd] and I wanted the Oscars to be a break from the preceding two years where tensions seemed to be ratcheted up in the country and we thought the Oscars are an island of focus for celebrating movies, because we figured you know the winners would comment as they saw fit or not about anything that was topical. We didn’t know at the time if anything was going to be in the air.

Hill: And so now that you’ve seen some of the other attention these speeches have gotten at awards shows leading up to yours, do you reach out to the nominees suggest anything to them about their tone?

De Luca: We thought the most elegant thing to do, the most respectful thing to do — because I really do feel like that 45 seconds is their real estate and they’ve worked their whole lives to that point to get to this place where the excellence in their work has been rewarded. So I think if people feel moved to do something in the moment that’s unscripted and it’s from the heart, so be it. So we’re kind of up for anything, we want the show to be vibrant and not be, not be canned and be really live.

De Luca: To me–and I consume a lot of news and a lot of pop culture and I’m a kind of a political junkie. I think it’s even bigger than politics. I think there’s been an unease and an anxiety since the economic collapse in 2008 and that’s still rolling through a lot of people’s lives, so you know I think people do want to escape when it’s anxious times. I’m less up for like dark, dark movies about anti-heroes when things are making me nervous. I want to see myths that reassure my maybe misplaced sense of justice in the universe. I want to see good guys versus bad guys. And this is just my personal taste but it’s not fun to have angst in your real life and then go to the movies and be hit with it again.

Hill: What questions do you have about the industry as you sort of look at the film industry. What do you sit around and think about?

De Luca: I would love for the studios to walk and chew gum at the same time. I always think of the spot the studios found themselves in at the end of the 60s. At the beginning of the 60s, when “Sound of Music” was made, everybody had to have a musical. So the studios made tons and tons of musicals, and by the end of the 70s they had completely burned out on musicals. Nobody wanted to see another musical. And then that set the table for all the filmmakers of the 70s because the studios were like, “We don’t know what to do anymore. Let’s just let this guy Coppola and this guy Scorsese.” And later, obviously Spielberg and Friedkin and I think  we’re at a point now where things are a little homogenized—

De Luca: I love me some superhero movies! Like I still have my comic book collection from when I was a kid, but you have to have new stuff. I’m not sure the 15-year-old version of me today is turned on by the fourth version of how Batman got upset. But as long as there is a you know you know some investment in what might be next for the audience coming up, then I think everybody be on safe ground.

Hill: So what are you going to do the day after?

Hill: The lines are too long at Disney. What are you going to do?

De Luca: I’m a masochist so I’m going to read every single review. And then I’m going to do a postmortem with Jen and everybody we worked with about the experience. Thank everybody. And then go to dinner. And eat really good comfort food. With me it’s all pasta.