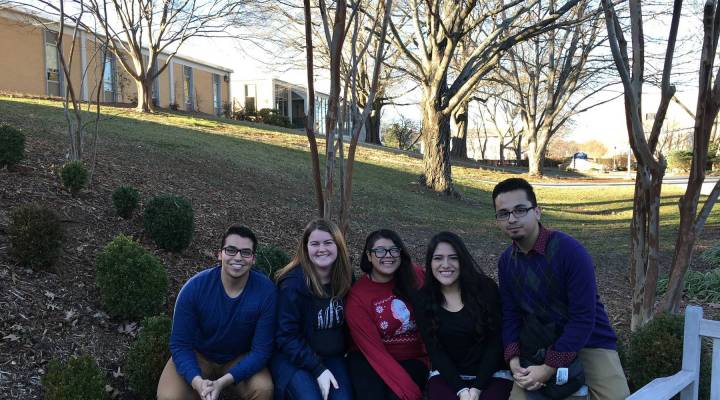 Dalton State College in Dalton, Georgia, attracts students from all over Georgia and all over the world, but the manufacturing city it calls home still has a strong influence on the small campus. Dalton is where most of the carpet in the United States is produced, and many of the students here have parents who work in the carpet industry or are preparing themselves for science and tech jobs in manufacturing.

Dalton’s population is 48 percent Latino, and the college’s student body is nearly 25 percent Latino. The demographics of the college and the city make for some complicated political dynamics; Dalton voted heavily for President Donald Trump in the election, but many of the people living, working and attending school in the city are immigrants or the children of immigrants.

Juan Garcia, a senior at Dalton State, said the election has been hard on him and many of his friends.

“You live with this racial tension your whole life that a lot of people don’t really understand,” he said. “When Trump got elected, and we found out that he won, I got a lot of racial tension towards me just because of my skin color, even though I consider myself an American. It’s been hard.”

Garcia is part of a group of students on campus who lead orientation programs for new students. Of the five student leaders who make up the orientation team, four are immigrants. In a conversation about what it feels like to be an immigrant at Dalton, the friends opened up about their experiences.

Laurely Caycho, a student who falls under the Deferred Action for Childhood Arrivals policy, agreed with Garcia about the atmosphere on campus post-election.

“Do we feel attacked?” asked Caycho. “Yes. Every day. But I think this is where your open mindedness comes into play as well … you might get racial comments from students, but then you have to understand that they don’t know what it is to be stepping in your shoes.”

Caycho is 26 and has been studying at Dalton State for nine years, paying out-of-state tuition because of her DACA status and earning credits one by one, taking as many courses as she can afford. She’ll graduate in May and wants to return to Dalton State to work.

Diego Alvarado Ruiz, a freshman, said that he also wants to return to Dalton and Dalton State when he finishes his degree. He grew up in Dalton but had to leave the country for four years while he waited for a green card. He knows he might have to leave Dalton to pursue higher education, but said, “I feel such an emotional connection to Dalton and Dalton State … my dream is to be able to come back to Dalton and to be able to give back to this place that’s giving so much. I’m still technically a freshman, and already I feel like this is home.”

Juan Garcia’s and Diego Alvarado Ruiz’s parents all work in the carpet factories in Dalton. Both have green cards and are eagerly awaiting the day when they can become U.S. citizens. Marlen Hernandez Garcia, another member of the orientation leader group whose family works in the carpet industry, recently passed her citizenship test.

“We came here illegally, me and my family. So both my parents, me and my twin brother were illegal,” Hernandez Garcia said. “We went through the same troubles that a lot of undocumented people go through … trying to get a job without a Social Security card, trying to go to school, trying to get all these programs that benefit permanent residents and citizens.”

“One of the things that a lot of people don’t understand about becoming documented is it takes a lot of money,” she said.

Hernandez Garcia’s mother was the first in the family to take her citizenship test, and because it can be difficult if you don’t understand English well, she memorized each of the 100 possible questions and answers.

“She’s given 20 years of her life to America, to its economy and 10 years to the Dalton community,” Hernandez Garcia said, “so she wanted to become a citizen so she could give more, have the chance to vote in our election … and she passed.”

Hernandez Garcia and her brother took the test next. When she passed, her family and her orientation leader friends were there to support her.

“It’s really encouraging to know that there are so many people out there that want you to succeed,” she said.

The importance of family — the one you’re born into and the one you create for yourself — was a big focus for all of the orientation leaders. Each of them feels a drive to support their families and to stand by each other within the Dalton State community.

Meghan O’Toole, the only white member of the orientation leader group and the only one born in the U.S., spent much of the conversation about immigration and politics listening to her friends. But when the group talked about what they each want for the future, she said something that resonated with everyone.