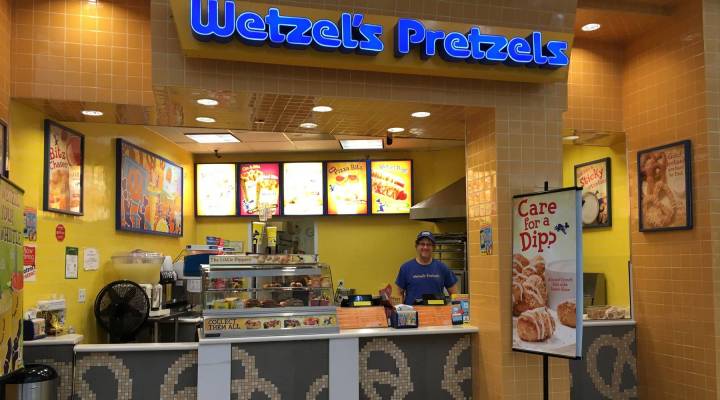 CEO Bill Phelps says his thoughts on minimum wage have evolved. In 1994, Phelps co-founded the fast food chain Wetzel’s Pretzels, which has almost a hundred outlets in California.

“Like most business people,” Phelps said, “I was concerned about it a couple of years ago when California started raising the minimum wage.”

Phelps worried increasing wages for his employees would cut into profits and that if he raised prices to compensate, fewer people would come eat and sales would drop. But something else happened entirely. Sales at his California stores immediately shot up.

“I was shocked,” Phelps said, “I was stunned by the business.”

The same exact pattern happened in 2016, Phelps said: A wage increase by the state led to a bump in business. Now Phelps is convinced that minimum wage increases aren’t bad for the fast food business. They’re great.

“The increases in minimum wage have been good for my business, and the data would support what I’ve said,” Phelps said.

One beneficiary has been the the Wetzel’s Pretzels franchise in Concord’s Sunvalley Shopping Center. At the mall you can smell the pretzels from far away. As you get close, you hear the sound of a mixer banging dough. It has to run constantly to keep up with the demand for pretzels. Business has been good the last few years, said franchise owner Mike Jacobs.

“My overall sales were something like 15 percent ahead after the first minimum wage bump, and now they’re about 12 percent ahead this year,” Jacobs said. “It isn’t because I’m such a great manager or smart guy, but the buying public has more money in their pocket.”

Jacobs said the store had to raise prices slightly to accommodate rising wages, but that those increases had not affected substantially business. At the same time, Jacobs said, more people are now coming in to shop and buying more than they used to. Sure enough, as Jacobs and I talk, a mall employee stops in to buy a pretzel. He ends up also paying for a dipping sauce and a drink. Jacobs said sales like this are happening all the time.

Maybe this is all just coincidence; maybe California’s economy happened to jump at the same exact times the state raised minimum wages. Maybe the franchise owners all started doing something to increase sales. Even if minimum wage increases are also increasing sales for Wetzel’s Pretzels, who knows if a similar trend would happen at all fast food companies? Most Wetzel’s outlets are in places like malls, where there are lots of low-wage workers around to shop. No economist has pored over the company’s data to do a proper case study.

Economist David Card from the University of California, Berkeley, has studied the minimum wage for over two decades. In the early 1990s, he published this influential case study that showed increasing the minimum wage did not reduce employment, as critics feared. Card said many of his colleagues have long suspected rising minimum wages could increase fast food sales. But no one could prove it, because American companies rarely give out information like the Wetzel’s Pretzel’s sales data.

“Firm information is extremely difficult to get,” Card said.

To test this theory, Card believes economists would need the kind of sales data Phelps is talking about at Wetzel’s Pretzels. It could be the missing piece.

“Everyone knows it has been a gap,” Card said. “There has been a lot of speculation, but no one has figured out how to obtain the data.”

Card said this is a big problem when it comes to the minimum wage debate. We don’t have good data to understand the whole picture. Even so, Card said some economists continue to say rising minimum wages are bad for the fast food business. Stakes on this issue are high, asa number of states are currently raising minimum wages.

At the mall in Concord, store owner Jacobs doesn’t need an economics case study to know he’s been doing well.

“By my looking at it, the minimum wage increase has just been a godsend,” Jacobs said. “My income this year will be double what it was in 2013.”

Jacobs is already putting his own increased profits back into the economy. He collects guitars and has been using some of his extra funds to buy new ones. With the minimum wage going up, he said everybody is a winner. His employees have gotten a raise. His CEO is getting big numbers. His customers can buy more pretzels. And Jacobs can buy more guitars.