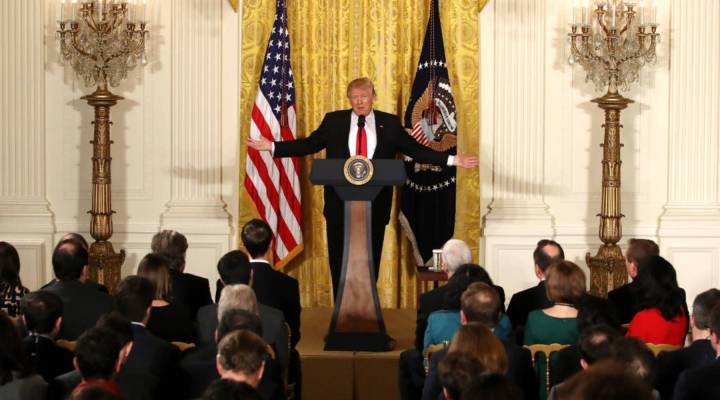 COPY
U.S. President Donald Trump speaks during a news conference announcing Alexander Acosta as the new Labor Secretary nominee in the East Room at the White House on February 16, 2017 in Washington, DC. The announcement comes a day after Andrew Puzder withdrew his nomination. Mark Wilson/Getty Images

Trump said Acosta, who did not appear with the president, “has had a tremendous career.” He noted that, unlike Puzder, Acosta has been confirmed by the Senate three times and “did very, very well.”

If confirmed anew by the Senate, Acosta would become the first Hispanic member of Trump’s Cabinet. He is now dean of the Florida International University law school.

Fast-food CEO Andrew Puzder pulled out on Wednesday after it became clear he lacked the votes to win Senate confirmation.

Trump said he had just spoken with Acosta before coming to the East Room for the hastily arranged news conference, where he made the announcement.

“I wish him the best,” Trump said. At a White House event earlier, he had described Acosta — without identifying him — as a “star” and a “great person.”

Acosta has served on the National Labor Relations Board and as a federal prosecutor in Florida. He was named assistant attorney general for civil rights by President George W. Bush.

Puzder pulled out of the process on the eve of his confirmation hearing, which had been scheduled for Thursday, because Republicans balked at an array of personal and professional issues that dogged him. Puzder said he had employed — and belatedly paid taxes on — a housekeeper not authorized to work in the United States.

Puzder’s withdrawal was the latest example of the disorganized nature of the new administration not known for thorough vetting of its people or its plans. Contentious confirmation fights, a botched rollout of Trump’s refugee order and the ouster this week of National Security Adviser Michael Flynn have nearly paralyzed the administration.

With regard to Puzder, Republicans grumbled about the stream of “distractions,” including the torrent of criticism about his personal life and record as CEO of CKE Restaurants, Inc.

What ultimately drained Puzder of enough Republican support for confirmation was his acknowledgment — well after Trump had become president — of employing a housekeeper who was not authorized to work in the U.S.

Puzder said he had fired the employee about five years ago. But he did not pay the related taxes until after Trump nominated him on Dec. 9. Puzder said he paid the taxes as soon as he found they were owed, but there was no explanation of why he didn’t know or pay for five years.

Spokesman George Thompson said Wednesday that Puzder did not tell the White House about the housekeeper issue until after he had been nominated.

It’s unclear whether Trump’s aides asked the immigration question before the nomination even though such issues have sunk past presidential nominees. Trump has also taken a hard line on people in the U.S. illegally.

Individuals interviewed during the transition said they were not asked by Trump’s team to provide vetting information, raising questions about the level of scrutiny.

Ultimately, Republicans made it clear that Puzder lacked the votes in a chamber narrowly split between Republicans and Democrats. There was scant, if any, praise for his vetting. Majority Leader Mitch McConnell and Sen. Lamar Alexander, who would have chaired Puzder’s confirmation hearing Thursday, issued statements praising Puzder’s qualifications but saying they “respect” his decision.

Puzder fell to a relentless series of attacks from Democrats, labor and other groups who opposed him on ideological and personal grounds. They contended that his corporate background and opposition to such proposals as a big hike in the minimum wage made him an unfit advocate for American workers at the top of an agency charged with enforcing worker protections. They rolled out stories from workers who said they were treated badly at Puzder’s company. And they were ready to make his women and his workers part of the hearing on Thursday. Puzder was quoted in Entrepreneur magazine in 2015 as saying, “I like beautiful women eating burgers in bikinis.” He said the racy commercials for Carl’s Jr., one of his companies, were “very American.”

Democrats also said Puzder had disparaged workers at his restaurants. He was quoted by Business Insider as saying he wanted to try robots at his restaurants, because “They’re always polite, they always upsell, they never take a vacation, they never show up late, there’s never a slip-and-fall, or an age, sex or race discrimination case.”