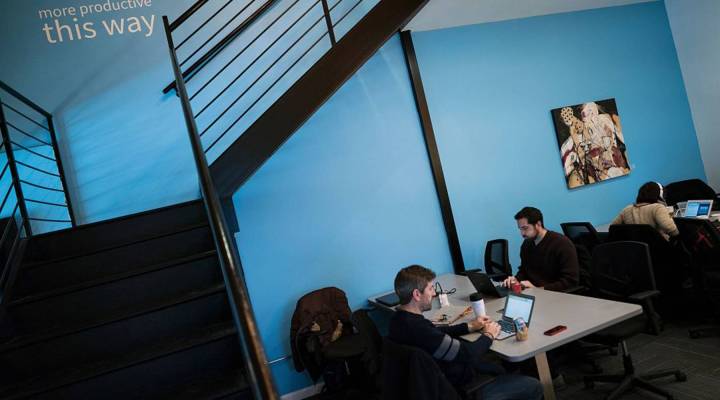 COPY
Co-working spaces like Cove in Washington, D.C., are growing as more people work the short-term jobs of the gig economy. BRENDAN SMIALOWSKI/AFP/Getty Images
My Economy

For this latest installment of our series My Economy, we hear from Tom Trimbath in Clinton, Washington. Trimbath’s work includes freelance writing and consulting.

My name is Tom Trimbath. I was an engineer at Boeing for 18 years. I was always working with commercial airplanes or commercial rockets or commercial satellites. I decided to make the turn when I found out I could retire at 38, which was a nice thing to have happen. It was actually at a time when there were cutbacks. And I was sitting there at work, and I knew that I had enough to live my frugal lifestyle. And I was watching all these young families, and they’re trying to figure out if they’re gonna make it through the layoffs. And it just felt like I couldn’t stay there.

When the recession hit, that happened to be when I lost a lot, and that’s when I had to scramble to find out some other way to kind of, all of a sudden pay a lot of bills. It was the hardest time then to step back into a regular full-time job, because there weren’t any.

Throughout the years, I’ve been trying to get back into an engineering job because they pay really well, and I really enjoy the work. I mean, it’s really neat to kinda make things fly, literally.