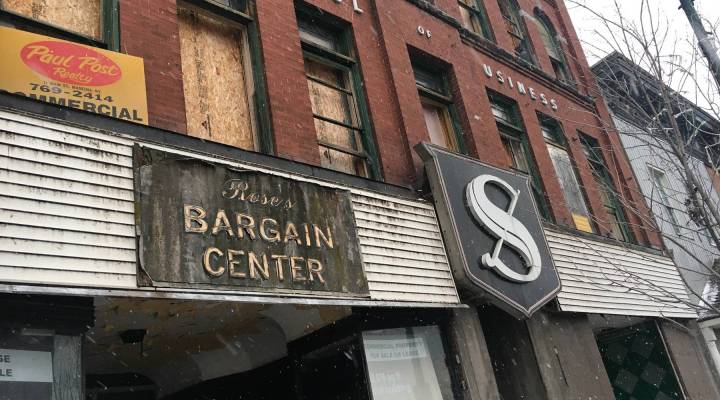 COPY
Downtown Massena has a lot of boarded-up buildings, including this former School of Business. Mitchell Hartman/Marketplace
The Big Promise

Downtown Massena has a lot of boarded-up buildings, including this former School of Business. Mitchell Hartman/Marketplace
Listen Now

For nearly a century, the aluminum industry provided some of the best-paid manufacturing jobs in rural America.

The industry boomed from the early 1900s through the post-WWII years, as the new lightweight metal was used for ships and airplanes, home appliances and food packaging. Sprawling smelting and rolling operations, which use a massive amount of electricity, were built along major U.S. rivers with hydroelectric resources, such as the Columbia and St. Lawrence.

Many of the hard manual-labor jobs at aluminum smelters required no more than a high school education. The work was steady as long as the U.S. economy was growing. And the jobs, many of them with union representation, paid wages that could support a family, along with health and pension benefits for a secure retirement.

But the industry’s footprint in the U.S. has been shrinking for several decades. There are fewer factories and fewer jobs. Since the early 2000s, the decline has been precipitous, as U.S. producers faced plummeting world commodity prices in the wake of a major recession and a flood of cheap aluminum from China, which the U.S. government alleges has engaged in unfair trade practices in order to gain market share from U.S. competitors.

In November 2015, Alcoa, the oldest and biggest American aluminum producer, announced it was curtailing domestic production in the face of poor global market conditions and said it would close several of its remaining primary smelters in the U.S., including those in Massena, New York and Wenatchee, Washington. In all, more than 1,000 aluminum workers nationwide were to be laid off.

The news hit the affected communities hard. Bob Smith, president of Steelworkers Local 420 in Massena, had just made the first mortgage payment on a house he’d built for his young family. That day, he was installing a furnace and said he found himself “in the crawlspace, looking down and just seeing the tears hitting the ground. So that’s what we went through.”

Mark Goodfellow, Bob Smith and David LaClair Jr., leaders of Steelworkers Local 420 in Massena. The Steelworkers organized with other unions.

The Steelworkers organized with other local unions. Local officials and businesspeople pressured state elected leaders. And three weeks after the original closure announcement, Alcoa and Gov. Andrew Cuomo announced a deal to keep the Massena smelter open and maintain 600 jobs at the facility through March 2019. Alcoa would receive financial incentives from the state economic development agency and the state power authority totaling $73 million, subject to specific performance targets, and also subject to significant financial penalties if it did not meet them.

But even with these 600 jobs saved, and protected for several more years, Massena has seen an exodus of jobs, companies and families in recent decades. Alcoa’s operations have been downsized and General Motors’ car plant closed in 2008.

Unemployment in St. Lawrence County is 6.1 percent as of December, among the worst in the state. Main Street in downtown has a lot of boarded-up storefronts.

“You can’t drive a street in this town without seeing a house or two is for sale, if not run down,” said union aluminum worker David LaClair. “The drugs have moved in.”

Erin Covell, a guidance counselor at Massena Central High, represents the American Federation of Teachers in town. She helped organize a “People Over Profits” rally to pressure Alcoa. She’s seen the result of deindustrialization in her school as well-paid jobs for high school graduates disappeared.

“We have started helping students with food and clothing and shelter, not just the student, but their entire family,” Covell said.

There are now economic development plans going forward on Massena’s riverfront, which Karen Saint Hilaire, a former county administrator and business professor at the State University of New York, said is a good start for reviving the local economy.

But she’s skeptical about the $73 million in state financial incentives and power-cost assistance that Alcoa received to keep the jobs and smelter in Massena.

“It’s outrageous, and it makes no economic sense. It’s more money than any of those people working out there make,” St. Hilaire said. “However, I’m totally glad that it happened because it at least buys us three years to do something else.”

On a Friday night at the local hockey arena, a packed crowd showed strong civic spirit, cheering on the local high school boys team, the Red Raiders. Jim Hidy had come out to watch the game. He’s a former mayor of Massena and a retired General Motors worker.

“Hockey’s tremendous up here, just keeps the community together,” he said.

“I felt we needed a businessman running the business. When you get the industries back here, when you get fair trade agreements, middle-class America will benefit.”

Alcoa has not committed to keeping the Massena smelter open after its financial deal with New York State expires in 2019.