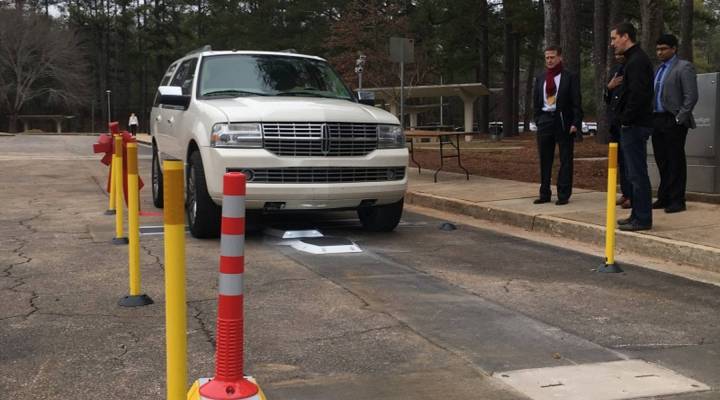 COPY
An SUV tests a system that allows drivers to check tire pressure without leaving their vehicle. Built by United Kingdom startup WheelRight, it's part of an effort to transform a stretch of Interstate Highway 85 in Georgia into a testing ground for technology. Bradley George/Georgia Public Broadcasting

An SUV tests a system that allows drivers to check tire pressure without leaving their vehicle. Built by United Kingdom startup WheelRight, it's part of an effort to transform a stretch of Interstate Highway 85 in Georgia into a testing ground for technology. Bradley George/Georgia Public Broadcasting
Listen Now

Allie Kelly sits on a concrete bench outside a rest area along Interstate Highway 85 in western Georgia, near the Alabama state line.

“The road is still dumb,” she said as cars and trucks whooshed by at 70 miles an hour.

Kelly works for The Ray, a nonprofit that is a key funding priority for the Ray C. Anderson Foundation, which funds environmental projects. It has spent about a half million dollars to make this highway smarter, though a lot of those ideas are still on the drawing board.

Cars are getting smarter and more sophisticated all the time, but the roads they drive on are still pretty much pavement. That’s slowly starting to change. States are turning highways into technology laboratories for everything from traffic management to environmental sustainability.

The Anderson Foundation project in Georgia includes plans for drones and sensors to monitor traffic, and roadside channels filled with plants that will purify storm runoff. Later this year, the foundation will install a solar farm in the median and shoulders of the interstate.

Solar panels created by French firm WattWay are embedded in the pavement at a rest area on I-85 near the Georgia-Alabama state line. The panels are part of a project by the Ray C. Anderson Foundation to turn a stretch of the highway into a testing ground for technology.

There are some signs of change at this I-85 rest stop. A French company embedded solar panels into the parking lot. A startup from the United Kingdom installed a system for drivers to check tire pressure without leaving their cars.

“Part of our partnership is to learn and to try and innovate, such that we can deploy this outside of this corridor on Interstate 85 to potentially the rest of the state and hopefully the nation as well,” said Russell McMurry, commissioner of the Georgia Department of Transportation. While the Anderson Foundation comes up with ideas for the I-85 project, his agency provides technical expertise.

“We have our normal day jobs to do, and we don’t have extra staff just sitting around saying, ‘What if?,'” McMurry said. “But it’s a challenge, having them to help challenge us to be innovative and think about things differently.”

Other states are starting similar initiatives. Missouri wants to turn Interstate Highway 70 into what it calls a “Road to Tomorrow,” which would use some of same technologies in the Georgia project. Ohio, Utah and Virginia are embedding sensors that can communicate with vehicles about traffic and road conditions.

States and engineers have always looked for ways to improve roads, said Bob Skinner, the former chairman of the Transportation Research Board, a program of the National Academy of Sciences. But that effort is starting to accelerate in anticipation of the day drivers will share the road with driverless cars.

“We’re going to have a whole host of operational questions about operating highways with both autonomous vehicles and non-autonomous vehicles,” Skinner said. “What sort of delineation — roadside markers, stripes on the sides of roads and so forth — what sort of features will aid the vehicles in self-navigation?”

All of this is happening as states try to figure out how to pay for their current road needs. Many have raised gas taxes.

California is already taking steps to prepare for driverless vehicles. The state is also looking for ways to make road construction greener. Kome Ajise, of the California Department of Transportation, said his agency wants to use more environmentally friendly materials, such as concrete made with reclaimed ash from coal power plants. But many contractors are reluctant.

“There are implications for a larger market because of contractors that work in other states,” Ajise said. “So, we’re making sure we’re not doing something that puts them at a disadvantage.”

This story has been changed to indicate the correct employer for Allie Kelly.  It also corrects the name of the French solar company in a photo caption.