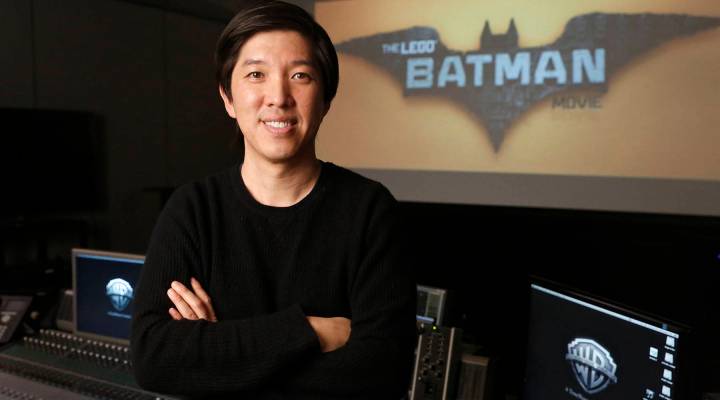 When Dan Lin produced “The Lego Movie” in 2014, he had no idea it would be a surprise super hit that would go on to make almost half a billion dollars worldwide. If his company’s follow-up, “The Lego Batman Movie,” does well at the box office like it’s projected to, Warner Brothers could have a lucrative new franchise on its hands. No pressure though. Lin recently spoke with Marketplace host Kai Ryssdal. Below is an edited transcript of their conversation.

Kai Ryssdal: Tell me, would you, where you came up with the idea for “The Lego Movie,” what is now becoming a franchise, I guess?

Dan Lin: I came up with it honestly just watching my son play. My son Miles was 5 at the time —

Ryssdal: Says every dad ever.

Lin: My home is an incubator for ideas. But I watched him play, and he was playing with his Lego. And I studied what he was doing. He was actually talking to himself. At first I thought he was maybe mumbling, but then I realized as I got closer that he was telling himself a story as he built these Lego creations. And so as I listened more to his story, I realized that he was telling this amazing story in his own mind, that there was this adventure going on while he physically played with these Lego bricks. And so I thought to myself, “If I can capture that imagination, that creativity that’s going on in his brain and kind of personify it into a movie, that would be a movie I’d really want to see.”

Ryssdal: The thing that gets me about this story, but a lot of movie development stories, is that this was back in, like, 2008, 2009 when you had the first idea, and the movie doesn’t drop till 2014, so it was a long time, this franchise was, in the making.

Lin: Painfully long. It was one of those things that I had to start by convincing people that this is a good idea. Starting with the Lego company, who were hesitant at the time. Their sales were through the roof every year in a down economy. You know, remember 2008-2009 was a bad time in America as far as the economy, and still their sales were up 25 percent a year. And so the big risk for them is why make a Lego movie? Because I was not asking them to make aNinjago movie or Bionicle movie, meaning a movie based on one of their toy brands. I was actually asking for the mother ship. You know, it’s a Lego movie, so there is no room for error, because if this movie didn’t work, I was going to hurt their main brand.

Ryssdal: That’s a big ask. Was it a series of repeated asks over the years, or did you go in and have one pitch meeting, and they were, like, “Oh, yeah, we’re on board”?

Lin: I wish it was that easy! I did have one pitch meeting in Denmark that I’ll remember for the rest of my life where we gave the pitch. And I was with the Hageman brothers, who were the original writers, who wrote the treatment for the movie. And we did pitch the two acts and that third act reveal that we ultimately showed in the movie, the father-son story. And I got to say, I still remember it. The executives in the room at the end of the pitch, they actually stood up and clapped. So I knew we were at a great way to start but that was only the beginning. You know, certainly they have approvals all the way, and there were times when we struggled with the movie, and they really hung in there with us. Famously, we had a whole version of the first movie that we put up in storyboards in black and white drawings, and we put it up, and the movie didn’t work, and we shut that version down and started again. And that was two years in the process. It was pretty scary.

Ryssdal: Did you have a sense when you were finally done, and you had the final print and colorized or whatever the movie language is, did you have a sense of how big it was going to be? I mean, it did like half a billion dollars or something.

Lin: Yeah, no, I had no idea. What we did know is that we put our hearts and souls into the movie, and so it felt like a very personal movie, and we walked away going, “You know what, no idea if it’s going to catch on, but we made the movie we want to make. And if people enjoy it, that’s going to be the ultimate win.” But certainly we had no idea it would become the phenomenon that it did.

Lin: I was — you know, honestly, I haven’t slept probably in two weeks, but now that reviews are coming in and people are responding to the movie, I’m able to sleep a little bit better. But yeah, the pressure is absolutely intense. Suddenly, Warner Brothers deemed us one of their three big tent poles that will boost their company. So there’s the Lego movies. There’s a Harry Potter franchise through “Fantastic Beasts” and there’s the DC movies and so —

Lin: It is, but it’s scary, because that’s the stuff that you know Wall Street’s talking about. Those are things that when you make a movie good, it’ll help boost the stock. If you don’t, you know it’s a major, major loss, so for us, you know, the pressure is certainly on.