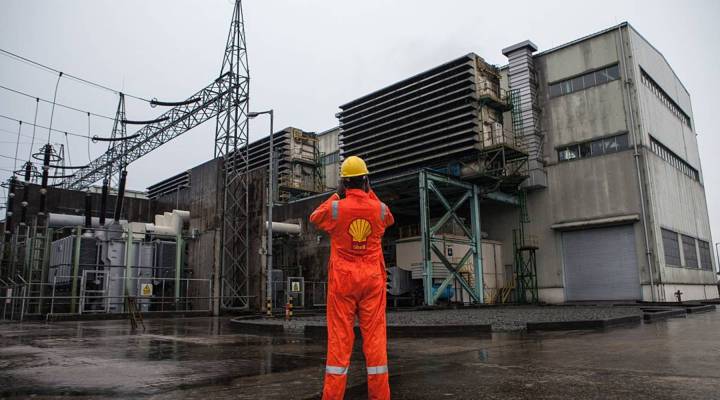 COPY
A Shell employee at the Afam VI power plant takes a picture at the plant in Port Harcourt on September 29, 2015.  FLORIAN PLAUCHEUR/AFP/Getty Images

A Shell employee at the Afam VI power plant takes a picture at the plant in Port Harcourt on September 29, 2015.  FLORIAN PLAUCHEUR/AFP/Getty Images
Listen Now

Italian prosecutors are seeking a criminal trial against Royal Dutch Shell as well as the CEO of the Italian oil giant Eni. The main question is: Did they bribe Nigerian officials to get access to oil fields with a load of money the Nigerian people never saw?

The case focuses on a deal in 2011: Eni and Royal Dutch Shell acquired offshore real estate in Nigeria to drill for oil. Prosecutors have lots of leaked documents, some detailing oilmen schmoozing with Nigeria’s ex-oil minister.

“We’ve got records of their internal emails describing how they’re having lunch, nice champagne with him and negotiating directly over how much they should pay him in exchange for this oil license,” said Barnaby Pace from Global Witness, an anti-corruption group.

The oil companies said they paid $1.1 billion to the government, though investigators said it went to shell companies, i.e., bribes.

These aren’t new questions for Nigeria, where whopping amounts of oil money have disappeared, said Natasha Ezrow at the University of Sussex in England.

“Whatever is going on is kind of murky,” Ezrow said. “But all of a sudden, the Nigerian petroleum company found they couldn’t pay $16 billion to the government in owed revenues. They didn’t know what had happened to it.”

Costantino Grasso, who teaches financial crime at the University of East London, said “corruption in the energy sector is widely rampant.”

He said the problem is entrenched because oil is so valuable to governments and their energy companies worldwide.

“Government companies, they would like to conclude contracts at any cost, even secretly bribing foreign public officials,” Grasso said.

Officials pocket the cash and the people never see it. It’s a piece of what many scholars call the “resource curse” — lots of countries rich in oil are actually very poor.