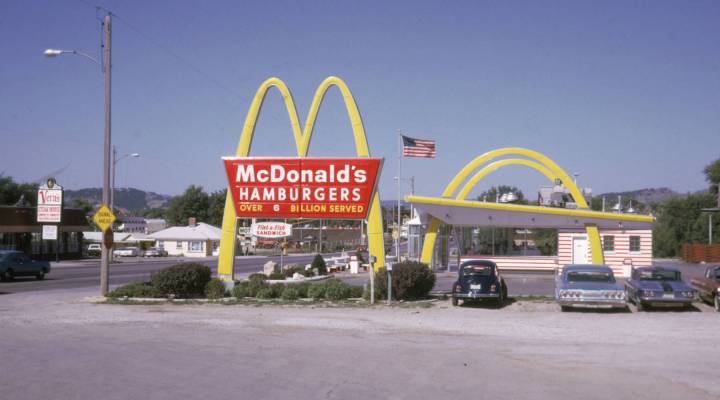 COPY
The exterior of a McDonald's restaurant from the '70s. Hulton Archive/Getty Images

The exterior of a McDonald's restaurant from the '70s. Hulton Archive/Getty Images
Listen Now

Although it may not be getting the critical acclaim of “La La Land” or “Moonlight,” students of entrepreneurship could be studying Michael Keaton’s “The Founder” for years to come.

Keaton plays Ray Kroc, the traveling salesman who made McDonald’s what it is. Except he’s not actually the founder. Kroc ended up buying out Mac and Dick McDonald, two guys from California who created what would become a multibillion-dollar corporation.

One thing that journalist Lisa Napoli keeps reminding herself is that “The Founder” is a drama, not a documentary. She said there are some discrepancies between the flick and what actually happened. She’s the author of a nonfiction book about the McDonald’s story called “Ray & Joan: The Man Who Made the McDonald’s Fortune and the Woman Who Gave It All Away.“

Napoli joined us to talk about the restaurant landscape prior to the rise of fast food and how much payout the McDonald’s brothers really got. Below is an edited transcript.

Lisa Napoli: They didn’t want to expand; their life was great. They were buying new Cadillacs every year. They were working hard in their McDonald’s restaurant. But they knew if they sold out that they would be working even more than they were now, and that they wouldn’t be able to maintain the quality that they’d achieved in their restaurant. They were ambitious enough, but they weren’t hyper ambitious to dominate the world.

David Brancaccio: It’s interesting they really had a vision for their restaurant and their food. They were almost like artists as opposed to businessmen who wanted to become publicly held and expand and expand again.

Napoli: Yeah. They knew that if they could come up with a system that made things efficient, that they’d be attractive to families. And that was the thing, David, that was missing at that moment in time in the post-World War II landscape when everybody was falling in love with the car. The suburbs were developing. This way they were able to have a nice, clean, efficient system that appealed to the families who were to be their biggest customers.

Brancaccio: But there’s a paradox. I mean, they have short, close-cropped hair as you would in the 1950s, but in a sense they’re almost counterculture people in the making. They’re into, for instance, locally sourced ingredients in the original McDonald’s.

Napoli: Back when McDonald’s started, people were used to eating at local places. There was no option. There were few options that weren’t local. And what happened was as we became more mobile as a culture, we wanted that consistency. We didn’t want to risk it — when we walked into a restaurant in a new town that we’d driven to with our families or on business — that that place that we’d go into was gonna stink. So we started looking for brands and chains that were familiar, because that way we knew we’d get the same sort of food we’d get back home. So yes, the brothers were on the vogue as far as preparation, but they were very typical of the times of wanting to be a locally sourced kind of game in town. And it was the whole force behind McDonald’s, as much as it was Ray, that made it necessary to have standardized fast food in the worst sense of the word.

Brancaccio: Having researched your own book and knowing what you do, as you sat there watching this feature film, did they get it right? The growing estrangement between the original McDonald’s brothers and Ray Kroc, this amazing salesman who had this much bigger vision? Did they calibrate the emotional intensity of that in an accurate way?

Napoli: Well, the emotional intensity was accurate. The specifics were not accurate. Basically what happened was that McDonald’s grew and grew. And Ray needed the brothers to go away. He needed to rewrite the agreement so that he could own the whole company, so that they could be positioned to go public.

Napoli: That’s the essential falsehood in the movie. The brothers did get a percentage of the profits. The original deal was 1.9 percent of a franchisee’s profits. It went to the McDonald’s Corporation and 0.5 percent of that went to Dick and Mac McDonald. The falsehood in the movie is that Ray screwed the brothers out of that half a percent. Basically what happened was Ray and the brothers were at odds. He went to them and said, look, what is it going to take to make you go away? They said $2.7 million — we want a million dollars each and $700,000 to pay our taxes. That’s how practical they were. And they were happy with that. It was 1961 and the problem was that Ray didn’t have anywhere close to $2.7 million. It’s important to remember that McDonald’s was precipitously close to folding at every step of the game once Ray got involved, because he didn’t have the right scheme to make McDonald’s grow until he met Harry Sonneborn who came along and told him it’s not about hamburgers, it’s about real estate. So basically Ray couldn’t find $2.7 million to pay the brothers off. Harry found the $2.7 million. And if he hadn’t, the situation, the agreement would have continued on the way it was in place with the 0.5 percent going and lining the brothers’ pockets in a really lovely, passive income. But Harry saved the day. He was able to convince these men, who they later called in McDonald’s lore “The 12 apostles,” and those guys came up with the cash that allowed him to buy out the McDonald’s brothers and make them go away. The movie says that they got screwed, but they didn’t.

Brancaccio: I want to understand this carefully. So first of all, a million dollars each in current money is about $8 million each, just to put this into some inflation perspective. But the movie says that at the end, the McDonald’s brothers wanted some percentage of future profits and that there was a handshake deal for that. But that the brothers never got the money. Your reporting says: What actually happened there?

Napoli: Basically Ray was able to come up with the $2.7 million. The brothers were invited to Chicago where McDonald’s headquarters was, and basically they got their check and they went back home and lived out the rest of their lives. What made them angry was that they never were given credit in the corporate hemisphere for many, many years. They were sort of erased from history. You don’t know when you start something that it’s gonna to become a major international corporation. And the brothers didn’t know that. They knew and had seen McDonald’s grow under Ray’s watch, but they didn’t know that it one day would have tens of thousands of restaurants all around the world. And they were older at that point anyway. They were comfortable. They were fine to walk away. Now that’s not to say that Ray wasn’t a tough guy and Ray was ruthless, but he didn’t screw them out of a half a percent of royalty.

Brancaccio: Still, it was a tough business. The brothers wanted to set up under a new name. They couldn’t use the McDonald’s name after the deal, so they they changed their name to what? It was M’s Burgers or something like that?

Brancaccio: And that failed. They couldn’t compete with McDonald’s.

Napoli: Well, actually, that’s another assertion in the movie that’s not entirely true. That restaurant continued on for several more years. The brothers had wanted to give over the restaurant to their employees and they did. But all of the information in the movie and in Ray’s autobiography, he makes it sound like he ran those guys out of town. And again, in my research, it didn’t show up that way. It didn’t turn out that way.

Brancaccio: So in the movie, Ray Kroc seems to have two wives. The first one played by Laura Dern, and later he meets Joan who becomes his second wife. In real life, not exactly?

Napoli: No. In fact, there was a whole wife that was missed in the movie. And that’s what makes the romantic drama between Ray and Joan so much more interesting. Ray divorced his first wife the same year he bought out the McDonald’s brothers, and Joan reneged on her promise to marry him then. And in the ensuing time, before she decided she would marry Ray, Ray ran off and married another woman named Jane, just to make things more confusing. Because he just said he couldn’t bear to be alone. And he was so in love with Joan from the minute he met her, that night he walked into a restaurant to sell her boss a franchise of McDonald’s. He just held a torch for her for years before she finally married him.

Brancaccio: Now the movie does predict Joan as a real business mind, that she herself comes up with some of the innovations that you saw at McDonald’s back then.

Napoli: Well, that’s not true either. The whole idea in the movie that Joan had come up with this mix for milkshakes to keep the stores from having to stock ice cream, which was very expensive as far as electricity goes, was completely untrue. Joan did work in early McDonald’s. Her first husband became a franchisee in Rapid City, South Dakota, and like all McDonald’s wives then, she worked behind the scenes ordering potatoes and helping staff up the crew because women weren’t allowed to work front of counter. But that’s a plot device.

Brancaccio: That said, the movie doesn’t fully flesh out the Joan Kroc character. You’ve spent more time thinking about her and writing the book. She becomes a world-class philanthropist.

Napoli: Yes. She was business-minded in the sense that you’re suggesting — just not the way it’s depicted in the film, of course. Joan gave an enormous gift to NPR at the end of her life and a 10 times larger gift to the Salvation Army. And she spent the rest of her life after Ray passed away in 1984 quietly becoming one of the great philanthropists of the 20th century — in a very inventive and unorthodox way. She dissolved her foundation. She gave anonymously in many cases, reacted to stories in the news. She was quite a character. And she had a great love of McDonald’s, of course, because it had made her first husband well-to-do. And she’d worked hard in the restaurants from the early days. And that’s what was so fascinating for me as a researcher — to get to know this woman who you just think of as a cartoon character. And that’s really how she comes across in the movie — is just this vampy woman.

Brancaccio: You suggest she gives it all away. I mean, there are no assets at the end of her life where there’s still some piece of this?