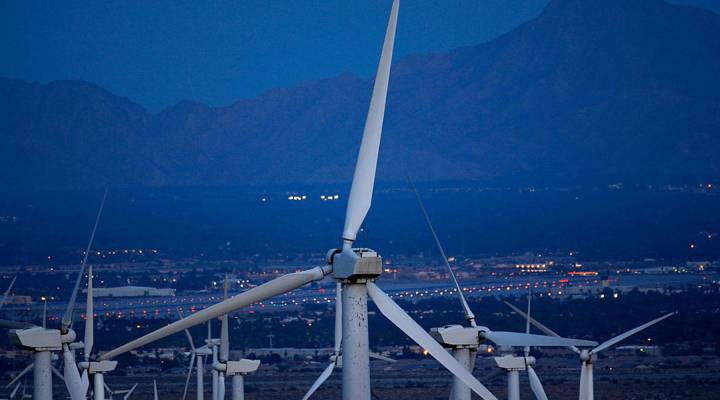 According to a couple of American billionaires, the future of the energy grid looks very green. Philip Anschutz, of oil and entertainment industry wealth, is hoping to build what would become America’s largest wind farm in Wyoming. What’s more, Warren Buffett’s Berkshire Hathaway, a large player in renewable energy, wants to build expansive power lines that would bring solar and wind energy to consumers in the West.

Sammy Roth has been following the future of the western energy grid in a series for the Desert Sun.

Marketplace host Kai Ryssdal spoke with Roth about why green energy is so enticing for Anschutz and Buffett and what obstacles there are to switching over to renewables. Below is an edited transcript of their conversation.

Kai Ryssdal: First thing I need you to do is set the scene for me. Tell me about this ranch out in Wyoming, basically the size of the city of Los Angeles. Right?

Sammy Roth: It is enormous. You know, you get there, and you just cannot believe that this is one property, one ranch. It’s owned by this guy, Philip Anschutz, one of the richest people in the United States, and it’s mostly empty. They’ve got some cattle running on it, but it’s mostly empty, and it was covered in snow when I was there in December, and it is super windy.

Ryssdal: Well, which explains why Anschutz wants to put giant wind turbines up there and then sell, basically, into the California market, is what he’s trying to do.

Roth: Yeah, that’s right. So he happened to own this ranch, and they were looking to sell it about 10 years ago, and then one of the guys who worked for him had this great idea of “Hey, you know this is one of the windiest spots in the continental United States. We could build a pretty big wind farm here.” And so they’ve been working on it for 10 years. They want to build 1,000 turbines, which would be the biggest wind farm by far in the country. And they would like to build a 730-mile power line just dedicated to this project to transmit that electricity to California, which wants it.

Ryssdal: California and its 39, whatever it is, million people. Right?

Ryssdal: Anschutz made his money in part in oil. Wyoming is a big, big oil and gas and coal state. They are not taking fondly, the Wyoming-ans, to this development, are they?

Roth: Well, it’s really tricky. Because on the one hand, they’re totally dependent on coal and oil and gas, and they have been for a long time. Fossil fuels are, like, 70 percent of state revenue. On the flip side, the people in power and in Cheyenne, the capital, see that fossil fuels and coal especially is on the decline. And on the one hand, they see wind as “Hey, this is a potential new source of revenue for us.” They’re already the only state in the country to tax wind energy, and now what they want to do is — some lawmakers anyway — want to raise the tax substantially. And so on the one hand, that could be something that in theory could raise new revenues for them. But on the other hand, there’s a fear among some people — especially those in the local areas, where these projects would be developed — that what they would actually do if they did that would be to tax the industry out of existence.

Ryssdal: So, here we are though, talking renewables in a state that’s got a history of fossil fuels. We are in a brand-new presidential administration that is very heavy on fossil fuels, not so much renewables. How does this all play out? Because as the folks in your articles say — and I will tell you, it’s a great series — but they basically say the market is going to decide this.

Roth: They do. That’s one of the most interesting trends in renewable energy right now. In the past, it’s been something that’s been thought of as, you know, policies in states like California or at the federal level are really responsible for the growth of solar and of wind. Increasingly, it’s happening because of finances, because they’re getting so cheap. I just saw some really excellent maps recently that UT-Austin did. They looked at what is the cheapest source of new electricity generation in every county in the United States. And you look at these maps, and you see across the Great Plains it’s mostly wind; in a lot of the West, it’s solar. Utilities and wealthy investors — people like Philip Anschutz and Warren Buffett — they’re making these long-term decisions about what they want to invest in, and they’re seeing that solar and wind is really the direction the country is moving in regardless of policy.