Whenever Brooklyn and Berlin appear in the same sentence, the word “hipster” always lurks nearby like a smug intruder. True, both places are littered with hipster bait, with store after store peddling expensive coffee and fixed-gear bikes. But there’s far more to Brooklyn and Berlin, of course. Right now the communities are working together to create something many hipsters don’t seem to care that much about: jobs. The idea is to drive growth and innovation by connecting the two emerging tech startup scenes.

Stefan Franzke works to reel in the world’s startups. He’s CEO of Berlin Partner, the public-private organization that pitches businesses large and small on moving there.

“In Berlin, we have the entrepreneur DNA in our blood,” he said in a conversation at Rainmaking Loft, a popular co-working space packed with caffeinated young entrepreneurs.

His pitch to startups is refined and simple: there’s great talent, cheap real estate, and everyone speaks English. Post-Brexit, he has been stressing access to the European market and a warm welcome for foreign workers. And of course, there are the cultural attractions.

“For young people, Berlin nightlife, it’s really amazing,” Franzke said. “We have galleries; we have cultural life. We have one of the highest-ranked discotheques, Berghain.”

Perhaps only in Berlin does a top economic development official cite a notorious nightclub that’s equally famous for its dance floor as it is for its dark and amorous corners.

Right now, the city is hungry enough for foreign startups to roll out a red-carpet offer. Brooklyn-based entrepreneurs who merely visit get several weeks of free office space. Berlin Partner will connect them with potential customers, partners and investors. No charge. No obligation. (The offer also stands for startups from Tel Aviv, Shanghai and Paris.)

Shared_Studios recently took the city’s offer. The company makes giant immersive spaces where people around the world can see and talk to each other through massive screens:

Jake Levin, the chief of staff, spent several weeks in Berlin and came away impressed.

“It really did feel like resources were marshaled on your behalf in Berlin and that the sky is the limit when it comes to anything you want to do with your company, in terms of hiring and financial support,” he said. “It felt welcoming.”

He said Shared_Studios is now considering Berlin as its first overseas office.

The growing link between Brooklyn and Berlin works in the other direction as well. Take BigRep, a Berlin-based 3-D printing company. As the company grew, it wanted to set up a North American base.

“The obvious choice would have been going to Silicon Valley,” explained BigRep Chief Financial Officer Stephan Beyer. “We sort of moved away from that thought relatively fast.”

Beyer felt BigRep’s hardware focus wasn’t the best fit for the generally software-oriented Valley. Plus, an East Coast time zone was preferable. Atlanta and Chicago were under consideration. But then Berlin Partner suggested looking into New Lab in Brooklyn.

“This is the place for us. This is just perfect,” Beyer remembered thinking when he checked New Lab out.

It’s in a cavernous warehouse at the Brooklyn Navy Yard. The industrial history of the area dates back to when President John Adams wanted to make sure a brand-new America had a place to create a strong navy. Tens of thousands once worked here through World War II and beyond. But the Pentagon closed up shop in 1966, and the Yard hit hard times.

New Lab is a recent development, an attempt to build a new kind of high-tech industry. The former birthplace of warships is now full of growing startups. When Berlin was looking for an American partner, things quickly clicked.

A 3-D printer from BigRep makes a stool at the company’s Berlin headquarters.

“Berlin’s passion and scrappiness is something that we feel is so important to us here in Brooklyn,” said Dunia Dupont, New Lab’s chief operating officer. “We meet on that same playing field, and we’re able to relate in terms of how our companies are coming together to grow.”

BigRep’s North American offices are now here. And American startups at New Lab, like Shared_Studios, now have a risk-free way to try out Berlin as a place to expand. Over and over, entrepreneurs who’ve worked in both places keep talking about how similar the two startup scenes are: the manufacturing focus, the culture and the people.

It’s healthy to be skeptical of this kind of partnership, to wonder how much of it is getting real results and how much of this is just a bid for publicity. But participants cite real impact.

“While I was there, we actually hired two people. Both are actually Syrian refugees,” Levin said. “I can say very confidently that it was valuable in terms of job creation, in terms of professional connections and in terms of connecting with people who are potentially going to be able to help us expand our network.”

Brooklyn and Berlin both spent decades as underdogs, but have been on the rise lately. This partnership is a bet that their entrepreneurs have something to teach each other about rising higher. 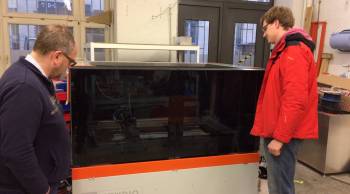