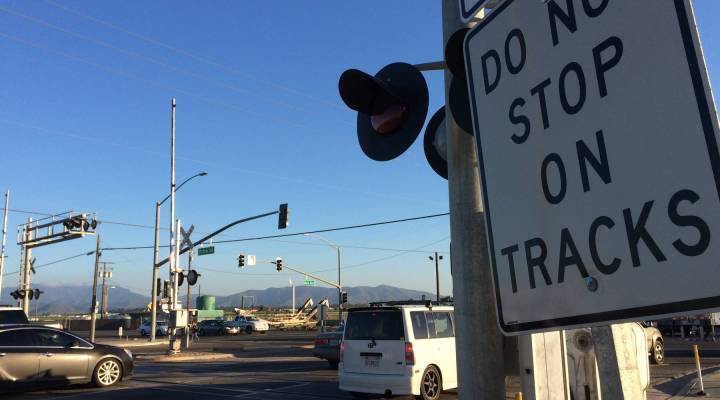 COPY
Many signs indicate the danger at the site of a deadly 2015 accident in Oxnard, California, where a truck driver turned his vehicle onto railroad tracks. Jed Kim/Marketplace

Many signs indicate the danger at the site of a deadly 2015 accident in Oxnard, California, where a truck driver turned his vehicle onto railroad tracks. Jed Kim/Marketplace
Listen Now

As more drivers today rely on smartphones and other GPS technology for directions, the ability of those devices to distract attention from the road has become a major safety issue. Many feel the danger is increased at railroad crossings, because they do not appear on most devices.

Government agencies have called on major technology companies to incorporate the locations of more than 200,000 crossings in their maps and to warn drivers when they are approaching one.

The National Transportation Safety Board made such safety recommendations after investigating a deadly crash in February 2015, in which the driver of a truck mistakenly turned onto railroad tracks in Oxnard, California.

“We did so because the driver in the accident in Oxnard turned about 90 feet too early,” Robert Molloy said, director of the Office of Highway Safety for the NTSB. “He was using map programs on his phone, but because of the way the signal was laid out, because he was fatigued and because of the proximity of the railroad tracks, he accidentally turned onto the railroad tracks.”

The driver abandoned his vehicle, and a commuter train crashed into it and derailed. Dozens on the train were injured, and the engineer eventually died. Molloy said the accident might have been avoided if the driving directions on the phone had shown that railroad tracks lay before the actual turn.

“Had there been a grade crossing displayed on that phone, he would’ve known actually it was the next right,” Molloy said. “But those intersections with grade crossings aren’t on the maps at all, so they become potential places where you could turn.”

The NTSB has joined the Federal Railroad Administration in calling for the safety features. Sarah Feinberg, a former administrator for the FRA, said she began pushing for them shortly after the accident.

“Back in the spring of 2015, I started lobbying these tech companies to take this grade-crossing data — this railroad crossing data — that we have and please integrate it into your mapping applications,” Feinberg said.

The FRA has a database of mapping locations for railroad crossings in the U.S., and Feinberg said considerable work has been done to make sure the information within it is accurate. Even so, there has been little indication that major tech companies have incorporated the verified data into their maps. She said she understands that companies have to consider cost and their own business priorities, but she said much would be gained if they did add crossings to their maps.

“There are 200 people a year that are killed at railroad crossings,” Feinberg said. “If we can alert them and let them know that they’re approaching a railroad crossing, we could save dozens and dozens of lives every year.”

On a recent Monday, neither Google Maps nor Apple Maps displayed any indication of railroad tracks at the site of the deadly crossing in Oxnard. It’s not clear why tech companies have yet to incorporate the data. Neither company agreed to give an interview on the matter.

Experts in the field, however, said there are several reasons why it could be taking a while. Christian Manasseh, CEO of Mobius Logic, has studied driver safety and technology. He said getting the data into the applications is relatively simple, but developing and testing the appropriate ways to notify drivers take time.

“The real effort is really investigating how to make it interact with the user in a safe way,” Manasseh said. “You don’t want to be liable for giving me a warning that caused me to hit the train, as opposed to me focusing on the road and noticing the train passing by.”

Michael Uhl, a partner at consulting company McKinsey, said another reason for the delay is that tech companies have not prioritized the crossings in their maps.

“Railroad crossings is probably on the list, but not way up on the top five or 10 list of what their priorities are in terms of what they need to work on to kind of get to the position for where the market’s going in the future,” Uhl said.

Instead, he said, companies are racing to make sure their maps will be usable by future self-driving vehicles.

“It is very much a strategic race to be the most relevant map solution for the future autonomous system,” Uhl said.

Even so, the push for autonomous driving means railroad crossing data will eventually have to be included in maps.

“Especially if there’s a railroad crossing that has had issues in the past with cars being hit or people being hit or hurt, you know, that would be a critical piece of information that will be added,” Uhl said.

Future incorporation may come sooner than later. Garmin has begun offering maps on its 2016 line of GPS units that display railroad crossings, according to a spokesman for the company. Cesar Palacios said the third-party vendor that supplies its maps had the crossing data. Palacios said along with safety considerations, the decision falls in line with its business model of providing customers with features they would normally only get in luxury or higher-end models of vehicles.

“It’s good to have an aftermarket solution, basically, for people that can’t necessarily spend money on getting those features preloaded on their cars already,” Palacios said. “So we have the option of give them our portable navigators and still get those features.”

At this point and in this one way, Garmin can offer a practically exclusive safety feature.