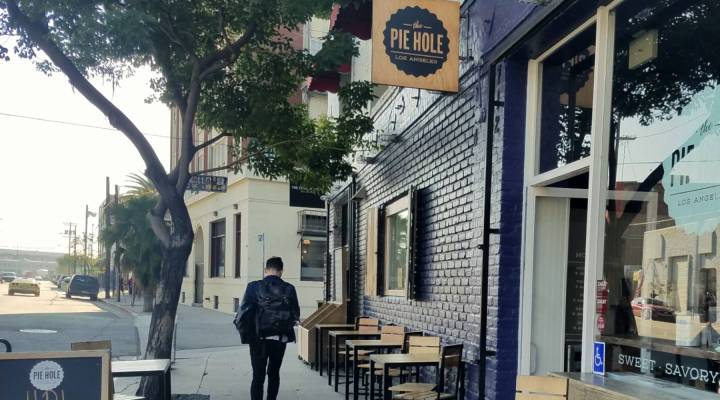 COPY
The Pie Hole's Los Angeles store. The owners have opened more locations, including one in Japan. Bridget Bodnar/Marketplace

The Pie Hole's Los Angeles store. The owners have opened more locations, including one in Japan. Bridget Bodnar/Marketplace
Listen Now

A couple of years ago, we stopped at a pie and coffee shop in downtown Los Angeles called The Pie Hole. Lindsay Hollister Heffner, her husband, Matt, and their friend Sean Brennan had opened it in 2011. They did well and opened more locations. Then they started franchising the business model, hoping to see Pie Holes opening around the world. They’ve got one open now in Japan and expect more franchise locations to open in 2017.

Despite the growth, it’s not all good news for Hollister Heffner and Brennan. In fact, 2016 was downright difficult for the company, in part because of the sometimes emotional reasons people reach for that slice of pie.

Lindsay Hollister Heffner: It was really awful. I’m not going to lie.

Sean Brennan: It was an intense year. It was good for the company, business-wise. The restaurant industry, third and fourth quarter, as a whole, didn’t do great — mostly because of the election and public perception.

Ryssdal: Really? So is that just like nervousness and uncertainty?

Hollister Heffner: We heard, statistically, people spend less in election years. So, I mean, it wasn’t like we took a really big hit, but we definitely noticed it.

Ryssdal: So talk to me. Since Election Day, what have you seen?

Hollister Heffner: So when we opened The Pie Hole, we talked. And we opened in the middle of a recession, right? And we thrived because everybody knew what was happening. They understood we’re in a recession and they needed comfort food. But since the inauguration … I think the uncertainty is just killing us.

Ryssdal: And so what are you going to do? Are you putting aside money or are you changing your budget for 2017 or 2018? What are you doing?

Hollister Heffner: We’re buckling down. Definitely. I mean, we’re making changes that any small business in our position should be making anyway — lowering costs and really focusing. But I think we’re on a roller-coaster ride. I feel like, personally, with this administration, it’s like we’ve learned that they can say one thing but then something else is being done. So we keep using that word uncertainty. But that’s really what’s happening. So it’s like we don’t see the plan, and we don’t understand. And then who knows what plan there is and if that’s even going to happen.

Brennan: Well, very specifically for us the one of the big issues is labor secretary. You know former fast food guy, right? That should be good for us.

Brennan: Right. That should be good for us. What’s not good for us is either the perception of, or the actuality of policy changes that would affect immigration that would then change the way that produce is made in California.

Ryssdal: So you’re skipping way down on my list of questions to ask, but since we’re on that now … immigration. Let’s say you want to make an apple pie, but immigration restrictions that are coming or have been put into place do something about agriculture workers. How do you get the apples that you need to make your apple pie if farm labor in this country is reduced?

Brennan: Or, the cost of it goes up. We’re very concerned that produce is going to skyrocket because labor is going to be affected. This is what farmers are saying in the state right now. And at the same time, if labor and commodity pricing changes in the state of California, where we get most of our produce, and we can’t find an alternate means in another state, or from Mexico, or someplace to get those commodities then ….

Hollister Heffner: I’m terrified of having to say, “Oh no, your apple pie is now going to be upwards of $40 or $45 for a whole pie.”

A display of pies at the Pie Hole in Los Angeles.

Ryssdal: Wow. You guys make really good pies, but I don’t know if I’m paying 45 bucks for an apple pie.

Hollister Heffner: Well we put 10 whole apples into every pie. And it’s all cut by hand, our dough is rolled out and made from scratch by hand, and it costs money.

Hollister Heffner: Well it’s not that right now, I want to make that clear.

Ryssdal: Right, right, totally fair. And for the record, I’m going to buy some pies on the way out here. Every time, the folks in the office say, “You gotta bring back pies,” and I do. All of that said though, about the caution and the uncertainty, the feeling now, 2016 was a year where you guys grew. You expanded your franchise. You’re in Japan now, for crying out loud.

Hollister Heffner: We did. We opened four stores last year.

Ryssdal: That’s a lot of growth for … you guys are still a startup, right?

Ryssdal: So take me through the calculus of “we’re going to do this now.”

Hollister Heffner: We definitely decided to grow very quickly and take anything that we had and put it back into the next store, and then the next store. I think we mentioned that we had a chance to be sort of first to the market for this concept, and we wanted to take advantage of it. But also, we knew that we couldn’t survive on just one shop alone. We couldn’t. It’s too expensive in California to have a business. So we had to open more stores. We knew that.

Ryssdal: Right in the whole franchising thing. Sure.

Hollister Heffner: Definitely. We have five shops that have leases signed.

Ryssdal: Wow. So that’s huge for you. In one year you’re going to open five shops?