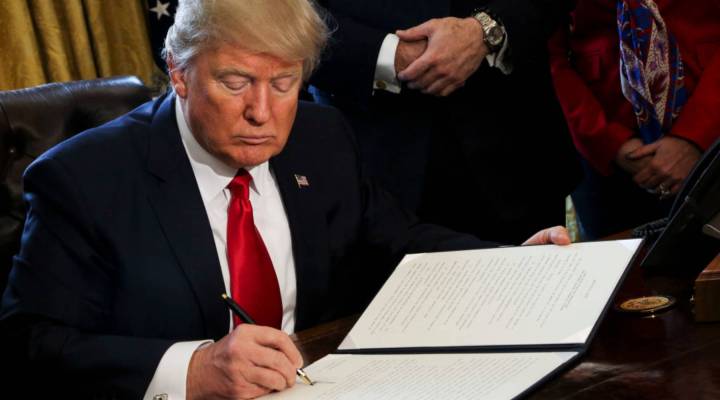 Silicon Valley just got a little louder in its clash with the Trump administration. On Sunday, almost 100 tech companies, including giants like Apple, Facebook, Google and Netflix, filed a legal brief challenging President Donald Trump’s travel ban. The amicus brief was filed in the U.S. Court of Appeals for the Ninth Circuit, which is expected to rule on an appeal by the administration after a federal judge put the travel ban on hold.

What difference can these powerful tech companies actually make with their legal brief? And how much of it is symbolic?

If you had to boil it down, there are two reasons that people — or in this case, companies — file amicus briefs, said Washington University law professor Stephen Legomsky.

“One of the things they can do is elaborate on very specific points that the main parties couldn’t elaborate on in their own briefs because of page limits.”

“They can add points that only those with their particular interests would even think of bringing up,” Legomsky said.

In this case, tech firms are arguing how the travel ban hurts their industry and ability to recruit workers from outside the United States.

“For a business like ours, talent is the lifeblood,” said Eric Duerr, chief marketing officer at Rocket Fuel, a marketing agency.

Duerr said his company joined the brief to send a message:

“For our clients, for our employees, for our investors, everyone needs to know this is a core value for us — of being inclusive and having diversity that leads to great, innovative ideas.”

So in many ways the move is symbolic — but do briefs actually influence the courts?

“Of course they do,” said Jane Aiken, vice dean at Georgetown University Law Center. She said a brief can remind judges of the different ways the ban impacts people and companies. But she said the fact these tech firms represent enormous economic power may not be that significant.

“Technically, this is a legal decision, and it should be based on the law and what the law essentially points to as the outcome.”

Aziz Huq, law professor at the University of Chicago, said amicus briefs, once rare, but have become very common.

“One ironic consequence of that is they may be less important than they used to be. When you have a case in which there are 30 or 40 amicus briefs, it’s pretty hard to figure out which ones are important and which ones are not.”

So far, only a handful of briefs have been filed against the travel ban, including one from Huq on behalf of Muslim groups.