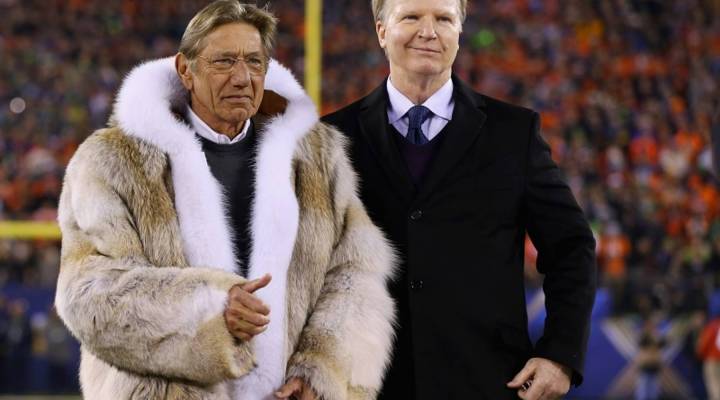 COPY
"Brands can go back in time to that spontaneous moment, and create content around it," said Stacy Minero, the head of content planning at Twitter. She uses Joe Namath and his fur coat as an example. Photo by Elsa/Getty Images

"Brands can go back in time to that spontaneous moment, and create content around it," said Stacy Minero, the head of content planning at Twitter. She uses Joe Namath and his fur coat as an example. Photo by Elsa/Getty Images
Listen Now

Everyone likes it when a brand makes a joke on Twitter. And it’s even better when the joke pokes fun at something that just happened.

Think back to the 2013 Super Bowl between the Baltimore Ravens and the San Francisco 49ers. The lights in the stadium went out halfway through the game, and play was suspended for about half an hour. During that time, Oreo tweeted that you can still dunk in the dark.

People loved it. And it wasn’t just that they were bored, it was that the brand was in the same position they were.

“We call that a social wink,” said Stacy Minero, who advised brands as the head of content planning at Twitter. “The reason it’s a wink is that the person has to be watching the live broadcast in order to get the reference.”

While it may seem spontaneous, Minero’s team helps brands plan to be clever.

“The first thing we always teach brands is to map their moments,” Minero said. “There’s moments over the course of the game, leading up to the game, that you can plan for.  There’s always a coin toss, there’s the national anthem, there’s a halftime show.”

Minero said it’s good for brands to think ahead about what they might tweet during those moments, as well as how they can take advantage of the unexpected. She asks brands to look back to the coin toss in 2014, when Joe Namath came out wearing a giant fur coat, somewhat similar to what he wore when he was a quarterback with the New York Jets.

“Brands can go back in time to that spontaneous moment, and create content around it, almost as a practice run to see what they come up with,” Minero said.

This year, Minero said to look for what she calls content with a cause.

“Given all the discussion around immigration and gender equality, you’re going to see brands dip their toes into that water.”

Which can be challenging for companies. But if those “social winks” pay off, it can be good for business. Because when someone winks as you, it means they like you, right? And you might be more likely to buy what they’re selling.