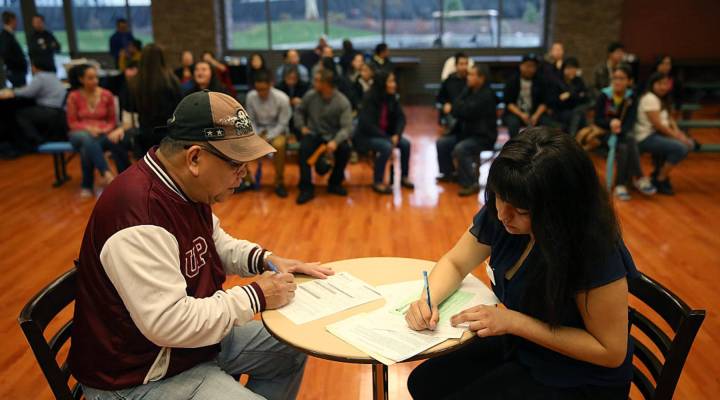 The first jobs report of the Trump administration was released today, revealing that the U.S. economy added 227,000 jobs in January. That number beat the 180,000 figure that many economists were predicting.

However, the unemployment rate slightly ticked up from 4.7 percent in December to 4.8, and wage gains did not exceed expectations. January’s data covers the presidential transition — spanning the final days of the Barack Obama administration to the first moments of President Donald Trump’s term.

Quincy Krosby, a market strategist with Prudential Financial, said a nice, broad range of jobs experienced gains — there were increases in the construction, retail and finance sectors.

Christopher Low, chief economist at FTN Financial, noted that we’re coming off a weak fourth quarter, and this is the biggest gain in payrolls we’ve seen since September.

“I think this is a pattern we’ve seen a lot since the Great Recession — that when there’s uncertainty, businesses put their plans on hold,” Low said. “That veil of uncertainty is lifted. And in January, we saw a nice pop, which I suspect is the first of a few months where job growth is likely to be above the recent trend.”

Average hourly paychecks of private-sector workers rose 3 cents, compared to a 6-cent increase in December. Over the past year, average hourly earnings have increased by 2.5 percent; economists had expected a more than 3 percent jump.

“That was a weakness in this report that you can’t erase,” Krosby said. However, she added that as the economy expands, we’ll see wages move higher.

It’s not clear if the new administration will pay much attention to the report. Trump said in the past that he doesn’t put much stock in government reports about jobs data. During Obama’s tenure, the unemployment rate dropped from a high of 10 percent in October 2009 to a nine-year low of 4.6 percent in November. At one point on the campaign trail, Trump cast the steadily declining unemployment rate into doubt.

“When people look and look and look, and then they give up looking for a job, they’re taken off the rolls, so the number isn’t reflective,” Trump said. “I’ve seen numbers of 24 percent, I actually saw a number of 42 percent unemployment — 42 percent. And it could be.”

Douglas Holtz-Eakin, who served as a senior economist during both Bush administrations, told us last year that “the notion that somehow they are gamed, politically, is nonsense.”

Trump spokesman Sean Spicer recently reaffirmed Trump’s attitude toward the Bureau of Labor Statistics. He said that Trump is “not focused on statistics as much as whether or not the American people are doing better as a whole.”