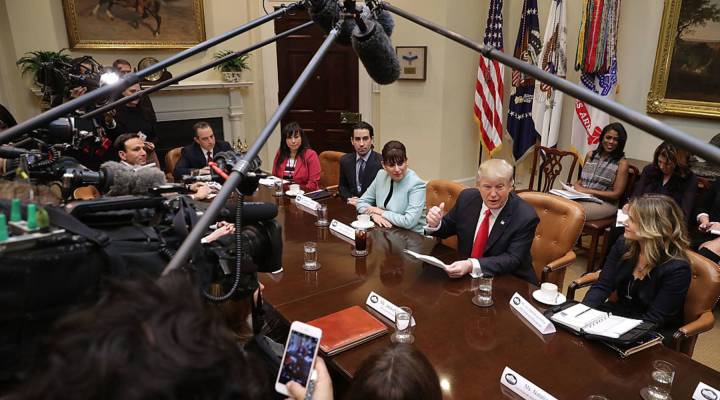 U.S. President Donald Trump delivers remarks at the beginning of a meeting with small business people in the Roosevelt Room at the White House January 30, 2017 in Washington, DC.  Chip Somodevilla/Getty Images
Make Me Smart With Kai and Molly

U.S. President Donald Trump delivers remarks at the beginning of a meeting with small business people in the Roosevelt Room at the White House January 30, 2017 in Washington, DC.  Chip Somodevilla/Getty Images

Who’s more powerful? The President of the United States, or Amazon? Or JP Morgan? Or Apple? We may be about to find out.

On “Make Me Smart” this week, Kai and I were riffing on fact that businesses seemingly have been on the verge of winning “bigly” in President Donald Trump’s economy — fewer regulations, significantly lower taxes, and a potential bonanza of infrastructure projects on which to bid. Instead, many of them are now coming out strongly against the president’s executive order halting immigration from “terror-prone” countries, and are even considering legal battles with the administration over it.

Here’s what we said about it on the show:

Kai: The businesses in this company are the establishment.

Kai: Laws here mean something. When you put your money into this economy, you’re counting on the fact that the law treats everyone equally. Without that … with a thing that happens, like the immigrant visa ban, where a lawful permanent resident of the United States can be banned from coming here — and yes it’s been walked back —but when that happens, without recourse to Congress of the courts, then a stock or a bond is just a piece of paper. And that is just bad for the entire capitalist system that this country has been developed on. And I don’t know where we go with that.

Molly: Well, where you go is to the central question of whether business becomes one of the systems of checks and balances.

In a government like ours, the economy and business are inextricably tied to our democracy—Kai called it a “capitalist constitutionalist system.” And in such a system, where the Supreme Court has given corporations the same rights as people in terms of contributing money to political campaigns, it only makes sense, that a company’s need to protect its employees and revenue streams might start to look a lot like moral activism.

Those actions started quickly after Trump’s executive order last week. Facebook’s Mark Zuckerberg arguably opened the floodgates with a post on the site two days after the order, affirming his support for immigration and opposing plans to build a wall along the Mexican border. Google opposed the immigration ban, saying it had up to 200 employees stranded outside the country after the order. Amazon and Uber also were trying to help bring employees home, and other tech companies began to condemn the move, as well. Since then, the drumbeat has only grown.

Amazon’s Jeff Bezos now says the company is working on possible legislative solutions, and supports a lawsuit by Washington Attorney General Bob Ferguson.
Apple is also considering legal action. Lyft, Netflix, Twitter, and other tech companies also condemned the order and pledged to fight with donations to the ACLU, among other actions.

And the backlash has spread beyond the tech industry to companies like Ford, General Electric, Starbucks (which pledged to hire 10,000 refugees), Nike, Goldman Sachs and jP Morgan. “Being diverse is not optional; it is what we must be,” Goldman Sachs CEO Lloyd Blankfein said in a voicemail to employees on Sunday.

Many of these companies, and even business-oriented think tanks and conservatives, are taking the stance because immigration, diversity and open markets are actually crucial to economic growth. Pro-market economists said expanding legal immigration is the only way American businesses can hire enough talent and grow their customer bases enough to hit the growth targets Trump himself has promised.

And there are PR concerns, too. Trump canceled a planned visit to Milwaukee and an administration official told CNN that it was because the company he planned to visit, Harley Davidson, was spooked by the threat of large protests. (Harley Davidson said no visit was scheduled.)

So, business has come off the bench even, as CNN’s Christine Romans pointed out, at the risk of “shareholder value.”

Obviously, though, mixing business and politics isn’t without its problems, for both the businesses and potentially for consumers (you know, “citizens”).

Uber faced a social media campaign when people believed it was profiting from a taxi strike in New York City that was held to protest Trump’s immigration ban. The #deleteUber campaign reportedly caused so many people to cancel their accounts that Uber had to scramble to create an automated system for it.

There was a #boycottStarbucks hash tag trending briefly on Twitter, as Trump supporters rallied against the company’s support for hiring immigrants.

And the stances could be financially risky, too. While we were taping our podcast on Tuesday, a friend mused to me in text that he’s considering selling Netflix stock because the President’s tweets about it (and potentially its policies) might really damage its business. Plus, we’ve seen what can happen to a company’s stock—even temporarily—when the President calls it out as not being administration-friendly.

Politically-leaning outlets on both left and right are picking up new friends or foes among the companies that either speak out or stay silent as more policies roll out.

Of course, our listeners are also concerned, rightly in my view, about an increase in the power of corporations over our lives. The same friend who mused about Netflix stock also pointed out the risk of “future extraterritoriality of businesses,” and their rights to maintain private security forces. Those kinds of checks and balances could get quickly out of hand. And lots of us clearly watch the same kinds of TV shows.

@kairyssdal @mollywood so… how long till the United Corporations of America (or the world)? #scifidystopia

Others worry that business has already influenced politics too much.

@kairyssdal @mollywood It's also a very very bad thing, given that business already controls 2/3 of the other branches.

And then there’s the question of who really benefits from an increase in corporate participation.

@kairyssdal @mollywood The side effect: the rich who buy from the businesses have more influence than the poor who do not.

@kairyssdal @mollywood I agree; But will/should these companies favor US interests or their GLOBAL shareholders/employees/customers?

All fair questions, and ones we’ll be keeping an eye on as things progress. Please keep the comments coming! Email them to us at makemesmart@marketplace.org or tweet us. We’re listening.