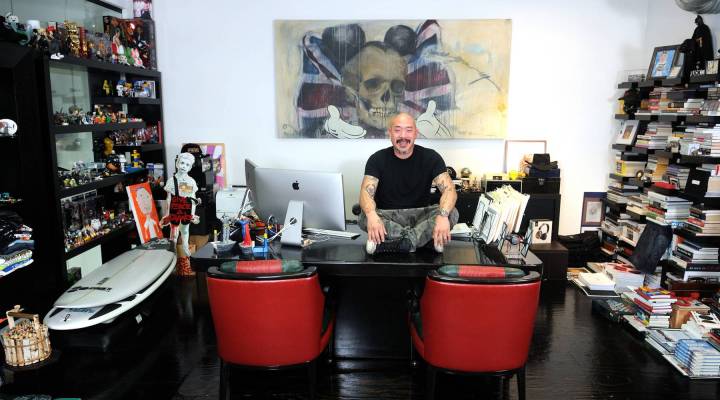 Peter Kim doesn’t run the family business, but he learned how to make it in the garment industry working at a company his parents founded after they immigrated to the United States. Today, he runs Hudson Jeans, a premium denim company he founded. And while they’re based in Los Angeles, their operation stretches beyond U.S. borders. Kim spoke with Marketplace Host Kai Ryssdal about how he his dad got him into the family business, and what the Trump administration’s latest policies mean for denim manufacturing. Below is an edited transcript.

Kai Ryssdal: You grew up in the garment business. Tell me the story.

Peter Kim: So I’m born and raised in L.A. Both my parents are from North Korea, they became refugees into the south. And so they grew up incredibly poor and in the early 60s they ended up immigrating out to the U.S. American dream and so forth. So they came to L.A., they saved their money they started an apparel company [making] career missy moderate polyester blouses.

Ryssdal: There are people in fashion who will know exactly what that means.

Kim: And it’s very niche but they had an incredible run at it because you know you have the 80s come around working women, dual income, respected. They made a ton of money, invested it all into real estate. And then the 90s come around, we had over $10 million in debt. Interest rates back in the early 90s were, I think we’re paying like 12, 13 percent. And at the same time the workwear environment change. And so their product and their business became irrelevant. You know, dress-down Fridays, basically 20 percent of the workweek is gone.

Ryssdal: So you’re in business school at USC and one day the phone rings and it’s your dad.

Ryssdal: Did you know what you were doing?

Kim: No. And the way I process it was “Okay, it’s not ideal. It’s a bit difficult. But my parents came from the north to, the south, to this country with zero — absolutely nothing. And they’ve created something here that’s pretty amazing if that’s possible. Maybe this is possible as well, but at the very least it’s an honorable noble death.” So, that was the attitude that we took.

Ryssdal: From the family business you start your own company called Jane’s Army.

Kim: That was my first run at the premium denim

Ryssdal: Which doesn’t go so well.

Kim: Yeah. The beginning was great. We blew up out of the scene because it was in 2000, so super early on the premium denim side. This thing takes off, but then we’re making in Thailand, the whole category was new. We couldn’t control quality, couldn’t control deliveries, basically the product was not what we thought it was going to be. We shipped it anyways thinking “Okay, maybe we have a shot.” Which was a huge mistake … ended up shutting the company down because I was like, “we might as well restart.”

Ryssdal: So what made you then after Jane’s army and the alright so here’s the word — failure, right? Why did you want to get back into premium denim?

Kim: I found this passion and premium denim because the money part, the success part for me, the success has not much to do with the money part. And I understand the money part is important. It is a necessity and it’s really important, but what I always believe is the money isn’t what defines me. It is a product of doing something, hopefully really well, that’s impactful, that affects lives. And I think if you can do that—cause I just don’t believe the purpose of life is money.

Ryssdal: Okay but, right, I mean I get all that and I totally understand where you’re coming from. But here you are selling blue jeans for $150 or $300 a pop. Help me make sense of that with your ethos.

Kim: So it’s not something that we make for dirt cheap and sell it for $200. All of our denim is coming out of either Italy or Turkey, out of these premium mills that produce top quality fabric. And a lot of people may not know ,or know, that denim is something that’s very different than most apparel products.

Ryssdal: You mean the actual denim the fabric?

Kim: The fabric itself, so you have to start with that. And it’s just unstable so each role could possibly have different characteristics from role to role. Even in the same exact style if you will.

Ryssdal: So you have to have people opening the roles, cutting them, matching — all of that jazz.

Kim: Testing them, wash shrinkage and so forth, every single role to create consistency. It’s something that you know we’re fanatical about quality.

Ryssdal: Can I ask you a geopolitical question here? You do some assembly and processing work in Mexico right?

Ryssdal: So here we are in the in the Trump administration and the Mexican trade relationship is very much on the table. How much of a pain is that going to be for you?

Kim: I don’t know… we started our career in the company, were producing 100 percent in L.A. and it was possible back in 2003 or so. Over time and in more recent times, it’s become almost impossible to produce in L.A. and still keep, maintain reasonable pricing. It’s just between minimum wage and health care and energy, and so forth and so forth, it’s getting to a point where, to produce it here, the prices when it finally hits retail, it would be like 30, 40 percent higher.

Kim: Yeah right. That’s possible. It’s very possible. That would probably have a huge hit to premium denim in general not just for us, but in general because you know we’re looking all over the place to see where we can have the best quality and still have the proper pricing. And with the newest wrinkle, I guess we’ll just have to re-look at what’s going to happen and what are the possible outcomes of whatever he’s going to implement.