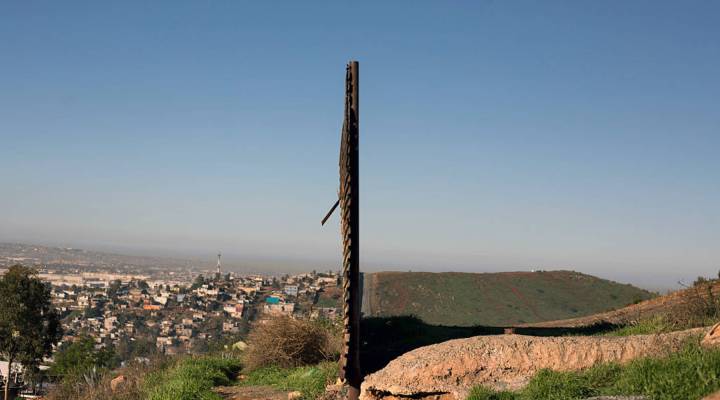 COPY
View of the border fence between Mexico and the US, seen from the Mexican side, on January 26, 2017, in Tijuana, northwestern Mexico.  GUILLERMO ARIAS/AFP/Getty Images

View of the border fence between Mexico and the US, seen from the Mexican side, on January 26, 2017, in Tijuana, northwestern Mexico.  GUILLERMO ARIAS/AFP/Getty Images
Listen Now

President Trump’s long-maintained promise to force Mexico to pay for a border wall has fueled speculation about how such a promise would be kept. White House Press Secretary Sean Spicer answered some questions today when he said a 20 percent tax would be imposed on all Mexican imports.

Such a tax raises many questions, including what unintended effects it could have on two tightly intertwined economies. The U.S. is Mexico’s largest importer. Mexico is the U.S.’s second largest behind Canada. Experts say tariffs on goods one way could be met with tariffs on goods the other way.

“Anything that would harm U.S. exports to Mexico or slow them down or tax them would actually have a huge effect on workers’ wages in the United States,” said Andrew Selee, Executive Vice-President at the Woodrow Wilson Center. “So both sides have a lot of leverage.”

Even so, some said the effects could have more of a negative impact on the larger of the trading partners.

“Realistically, it’s more likely that the U.S. economy will bear the burden of the fee than the Mexican economy,” said Gary Hufbauer, a senior fellow at the Peterson Institute for International Economics.

Edward Alden, a senior fellow at the Council on Foreign Relations, said President Trump’s actions and rhetoric indicate he is asserting a stronger hand in future relations.

“He’s looking to make a political point in U.S. relations with Mexico: ‘We’re the dominant partner; you’re the subordinate partner; get with the program,’” Alden said.

If relations worsen, however, Mexico may prove less cooperative on issues like security. Alden said it might even stop regulating its own southern border, where many refugees heading to the United States flood across from Central America.

“It’s not as easy to say no to those people as it is to say no to people from Mexico, trying to cross illegally,” Alden said. “They actually have a right to request asylum status in the United States. It’s written into U.S. laws.”