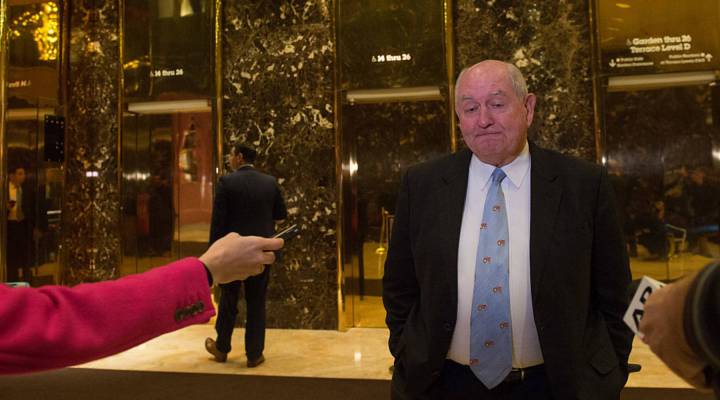 Sonny Perdue, President Donald Trump’s choice for secretary of agriculture, has deep ties to agriculture. Perdue is a former governor of Georgia, a state known for agricultural products including peaches, cotton and poultry. And agriculture has played a big part in Perdue’s other professional pursuits.

Young said Perdue will be a strong voice for trade in the new administration, which has sounded some protectionist notes.

Trump announced plans last week to begin withdrawing from the Trans-Pacific Partnership trade deal, which would’ve boosted U.S. farmers’ exports to Pacific Rim countries. Bob Young estimated the TPP could have increased U.S. farmers’ profits by as much as $5 billion.

“Now that we’re acting like we don’t like it at all, where do we get that replacement for that $4-$5 billion in income?” he asked.

“When we talk about slapping tariffs on people when they hold a lot of the cards in the trading equation, it’s a little silly,” Aitel said.

Aitel said he hopes the incoming ag secretary will help on that front.

Farmers will also look to Sonny Perdue to voice their needs as Congress writes the next Farm Bill this year. It sets food policy every half decade. Most of the last Farm Bill’s $1 trillion budget went to food assistance programs, like food stamps. About $130 billion of the last bill covered crop insurance programs and commodity price supports, which offset farmers’ losses if crop prices plunge.

Some economists question whether farmers should get that special help. But Kirby Hettver, a producer in Minnesota, said the safety nets are crucial. Prices for his corn and soybeans are down dramatically from a few years ago.

“It’s pretty tough to show a profit,” he said. “The financial strain on the industry is more than it has been in the past number of years.”

Many farmers will also look to Perdue to advocate for their labor needs within the new administration, as many rely on immigrant workers and don’t want the supply of workers cut off.