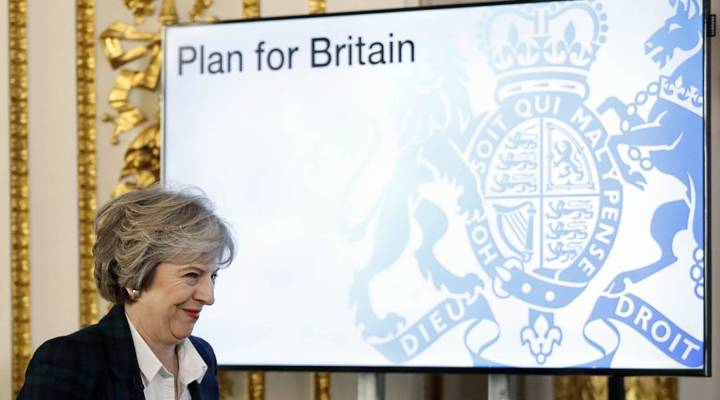 COPY
British Prime Minister Theresa May arrives to deliver a speech on the government's plans for Brexit at Lancaster House in London on January 17, 2017.  KIRSTY WIGGLESWORTH/AFP/Getty Images

British Prime Minister Theresa May arrives to deliver a speech on the government's plans for Brexit at Lancaster House in London on January 17, 2017.  KIRSTY WIGGLESWORTH/AFP/Getty Images
Listen Now

British Prime Minister Theresa May will be the first foreign leader to meet President Trump since his inauguration when she arrives at the White House on Friday. The meeting is   providing a boost for May as she grapples with the monumental challenge of Brexit. Trump has applauded Britain’s decision to leave the European Union, talked about deepening the special relationship between the two countries and offered a free trade deal to help the UK on its way out of the EU. Theresa May believes that the promise of such a deal could  strengthen her hand when she begins the Brexit negotiations with her European partners and seeks to keep barrier-free access to the European single market after Britain leaves the bloc.

The potential loss of that barrier–free access to Britain’s largest export market is worrying some British exporters and increasing the attractions of the American market.

“We’re very anxious about tariffs  going on our vehicles going into the Eurozone. It will destroy the market. People will just not buy our products and will look elsewhere for something different,” fretted Julian Turner, boss of Westfield, a small British manufacturer of classy, hand-built sports cars.

“We’ve been aggressively attempting to carve out other export markets. We’re very keen on the United States. It’s the land of opportunity. We’d love for Britain to have a free trade deal with America.” he said.

Trade in goods and services  between the two countries is roughly in balance and no one can say it’s unfair. The chances of a deal seem good, said Chloe Westley of the pro-Brexit campaign group Change Britain.

“I think Trump has a special place in his heart for the UK  and other senior Republicans  like Paul Ryan have also expressed an interest in signing a trade deal with the UK.  So it’s all looking very positive at the moment,” Westley told Marketplace.

But some trade experts have expressed reservations about a much closer trading relationships with the US. Professor Allen Winters of the Trade Policy Observatory at Sussex University says the U.S. will insist on full access to the UK  for its farm produce. And that would cut into European exporters’ share of the British market.

“That would be something that we would be essentially taking away from the Europeans and it would make it  quite a lot more difficult to reach an overall deal with the European Union.” he said. “ And we should not lose sight of the overwhelming importance of the market on our doorstep.  While America currently takes 12 percent of UK exports,  the EU takes almost 50 percent.  It’s always going to be our dominant trade partner.”

British consumer and food safety  groups have also expressed  concern about lowering some of the regulatory barriers against trade with the United States.  There is widespread opposition to allowing American genetically modified crops and hormone treated beef into the UK food chain.

But exporters with an eye on America’s huge market are eager for a trade deal.

Bambino Mio — a baby products company which , in spite of the name, is British — will sell more of its reusable diapers in the US than in Europe this year and the boss, Guy Schannschieff sees big opportunities for further growth.

Guy Schannschieff, who heads Bambino Mio — a baby products company — sees big opportunities for further growth as his company plans to expand more of it’s market into the United States.

“We are already selling very successfully in the U.S. This year our sales there will be even bigger but what excites me about a free trade deal is that it will make that process much easier,” he said.

But the skeptics say he shouldn’t expect a sweetheart deal from Donald Trump , who — after all — wasn’t elected to put Britain first.