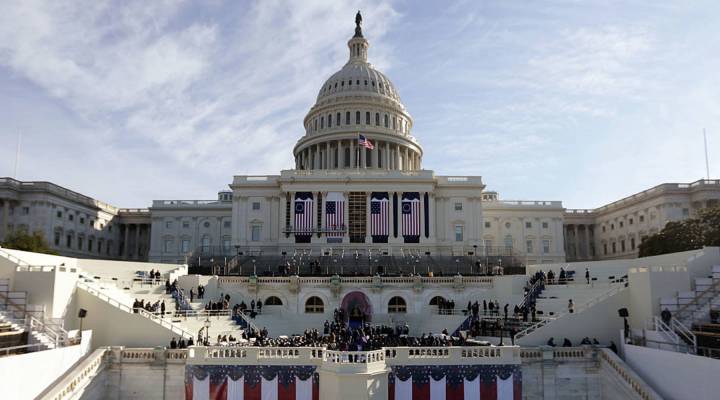 COPY
A view of the west front of the U.S. Capitol during the dress rehearsal for Friday's inauguration. Alex Wong/Getty Images

A view of the west front of the U.S. Capitol during the dress rehearsal for Friday's inauguration. Alex Wong/Getty Images
Listen Now

“The taxpayer pays for everything surrounding the actual ceremony that’s involved with swearing in the president,” Washington Post reporter Roxanne Roberts told us. “But all the things that we typically think of as part of an inaugural — parade, the balls, the fancy parties — are privately funded by the Presidential Inaugural Committee.”

To pay for the rest those costs for this year’s event, the committee turned to Trump’s wealthy friends, Roberts reported in early December. The committee has raised $90 million in private donations as of last week, Roberts said.

Taxpayers will pick up the tab for the rest.

“The biggest cost on the bill is taxpayer cost — all the stuff that makes sure this gets pulled off without a hitch,” she said.

So how much will everything cost? Some estimates are difficult to determine because Congress appropriates the funds in chunks, Roberts said. But based on previous inaugurations, the event could cost about $200 million.

They’ll also be other expenses, of course. Hotels and businesses stand to make plenty of money off festivities and protests.

Here’s what Roberts told us about some of the money floating around Washington this week:

$2 million for the swear-in. It turns out the actual swearing-in ceremony and subsequent lunch make up a tiny portion of the budget.

$100 million for personnel costs. Roberts said a big ticket item will be the cost of security. “The police, the security, the logistics, the military, all the equipment that is involved in making sure that this gets pulled off without a hitch,” she said. “Washington officially shuts down that day. And so it’s all the salaries for the people that get that day off. So it’s a great big number.”

A free concert, or $1 million dinner. The Presidential Inaugural Committee’s private donations pay for any costs associated with the parade or the concert. Roberts said there’s a welcome ceremony that is free to the public at Lincoln Memorial, but for the top donors, “a very fancy candle dinner,” with packages that run upwards of $1 million.

$50 tickets to the ball. The committee has said that it will sell a limited number of $50 tickets for the balls, according to Roberts. “But honestly I don’t expect to see a ton of those even though they say they’re expecting 30,000 people at the two official balls,” she said. “That will include people from around the country, and they’re expecting another 2,500 to a military ball saluting their armed forces.”

$10,000 for a luxury hotel room. Any hotel that isn’t filled with Trump supporters is filled with protesters. “You know, usually the losers stay home and they feel bad,” Roberts said. “But this time they’re coming into town so all the other hotels and restaurants and other services are being filled up by people who are coming in town to protest this inauguration.” Some luxury hotel rooms are going as high as $10,000 a night and they’re all sold out, including the Trump Hotel,” according to Roberts. When she asked hotel staff how much the rooms cost, they wouldn’t say. “I’m guessing that sold out in a flash,” she said. “But most of the top hotels have four or five night minimums. And so there they’re making what they always do, which is a killing off this.”