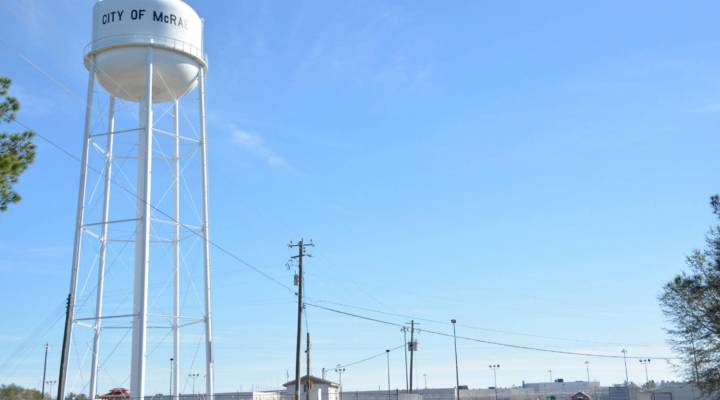 COPY
McRae Correctional Institution has been in this rural part of southern Georgia since the early 2000s, housing up to 2,000 federal prisoners. Ali Guillory

McRae Correctional Institution has been in this rural part of southern Georgia since the early 2000s, housing up to 2,000 federal prisoners. Ali Guillory
Listen Now

McRae-Helena, Georgia, with a population of about 8,700, is what you could call a prison town, times two. There’s a state prison at one end, and McRae Correctional — a private federal prison — at the other. Together, the two facilities house some 3,000 people.

Lon Hamilton owns the Southern Star Grill, a family-style restaurant not far from the federal prison.

“Since I’m the closest restaurant and the closest motel is next door, we do have the majority of the people that stay here,” he said. “Last weekend I think we had 21 that were here visiting.”

A view of the McRae Correctional Institution.

Hamilton was on the county economic development council when it convinced CoreCivic, formely known as CCA, to build a prison here in the early 2000s.

“We spent a lot of money just to get them here,” he said, noting that the county expanded its water and sewer infrastructure and put in access roads. Even though it took months after the prison was finished before it started operating, Hamilton said the investment has paid off in taxes and some 350 jobs.

When the U.S. Bureau of Prisons announced last year that it would phase out its contracts with private-prison operators, residents of McRae launched a letter-writing campaign.

“And not only were we doing it,” Hamilton said, “but every other community that had a prison was doing the same thing we were.”

Pamela Sosa with her dog, Littleman.

Private prisons are a nearly $5 billion industry in this country, with most of their business coming from state rather than federal contracts. Prison corporations have lobbied for increases in arrests and detention of immigrants, identifying federal immigration detention facilities as a growth area. Most of the private prisons run by the Bureau of Prisons also house immigrants who have been convicted of federal crimes.

Plenty of locals in McRae-Helena, which is just about 80 miles outside Macon, told Marketplace they would rather see other types of jobs come in. Cheri Spurlin, a retired schoolteacher, said being a prison town can feel like a dead end.

The town of McRae-Helena is quiet. It would be even quieter without a private federal prison there—but not everyone agrees on whether it’s a good thing for the town.

Another local resident, Claude Smith, said he didn’t know anyone who works at McRae Correctional Institution. Smith, who is about to start a new job at a lawnmower factory in town, said his main association with the prison is that it’s literally in his backyard.

“I could hear them at nighttime, and during the daytime on that loudspeaker, I guess, they got down there,” he said.

Smith said he has spent time in prison himself, and he doesn’t think privatized prisons benefit people or the community.

Claude Smith said even though the federal private prison is literally in his backyard, he doesn’t think it’s helping the community.

But closing ‘em all down — there are 13 federal private prisons around the country — is looking less like a sure thing. The Bureau of Prisons recently renewed the McRae contract with CoreCivic for another two years, though it did reduce the number of beds as part of its new policy of phasing out private prisons.

And Alabama Senator Jeff Sessions, the nominee for attorney general, has been supportive of private prisons. If confirmed, he could decide not to phase out private prisons after all.