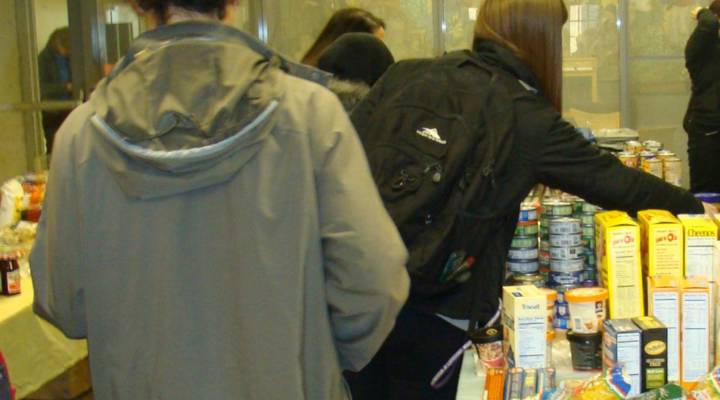 In Seattle, University of Washington senior Taylor Herring combines grants and part-time work to cover tuition and necessities. But toward the end of the quarter, his account gets pretty low.

“I think my second quarter here, after going through my first quarter running out of food, I was like, ‘Well, do I need to buy this book?’ I mean it’s so expensive, whereas later on I might need that,” Herring said.

Some of the food items offered at the University of Washington’s food pantry.

The cost of higher education is forcing some students to make choices between school expenses and basic needs. A recent study by student hunger advocacy groups found 48 percent of students surveyed at 34 colleges had experienced food insecurity in the last month.

Some schools are trying to help students by launching programs for students who need food assistance.

At UW, students pay more than $25,000 for in-state tuition and living expenses. Even with financial aid and part-time work, sometimes it’s still not enough.

“You kind of don’t think, ‘Oh, food insecurity is a problem I’m going to be facing.’ You expect it to be your grades and the homework load,” Herring said.

UW launched a food pantry in 2015 and served more than 250 students fall quarter. More and more schools nationally are setting up food banks, too. The College and University Food Bank Alliance fights student hunger. Since 2014, its membership has doubled, with almost 400 campuses participating.

“A lot of students are older. They’re supporting their own families, so serving those students and hearing from them that they had a concern over food insecurity is kind of where we got started,” said Priya Saxena, a grad student who helps run the food pantry at UW.

Food insecurity is just one issue that students face. Marisa Herrera is director of the university’s Kelly Ethnic Cultural Center, one of several campus partners behind the food pantry.

“I’ve heard everything from students living out of their cars to couch surfing,” Herrera said. “I think everyone can relate to being hungry. At least you can kind of empathize with what that might be like if you’re a college student trying to get your degree, but also, just trying to make it.”

As for Taylor Herring, he’s set to graduate from UW this spring and intends to apply to law school.

Correction (Jan. 17, 2017): A previous version of this story included an inaccurate transcription. The text has been corrected.