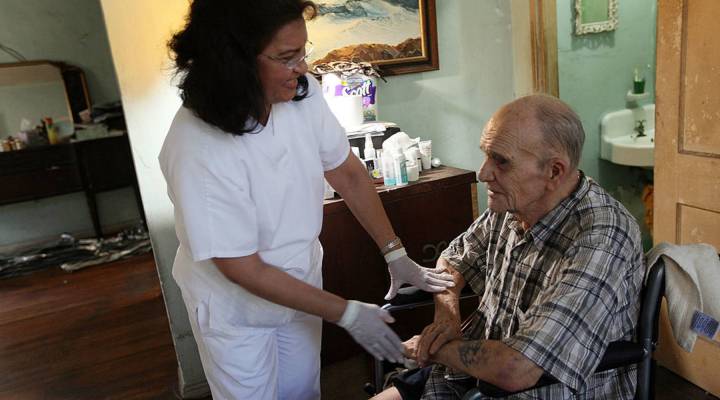 Paul Merenbloom, a former Wall Street analyst, decided to change careers to work on a passion project: a system to help older or infirm people live safely in their homes for longer.

SentinelCare keeps a close eye on loved ones who need watching in the home. How often is the person getting up at night? Getting around? Prepping food?

It’s a system that goes beyond the buttons or bracelets that summon emergency help.

Merenbloom joined us to talk about how the idea got started.

Read the full transcript of our interview below.

David Brancaccio: Now I remember, Mr. Merenbloom, you were, back in the ’90s, a Wall Street analyst. You’d comment on markets. What was the inspiration for this enterprise of yours now?

Paul Merenbloom: You’re going back quite a few years. The inspiration was actually right at home. It was my grandmother. At age 95, she decided to retire. She was still living independently, still very vibrant and very much in charge of her life. Unfortunately, one day, an error was made in dosing medication, which resulted in her ending up on the floor for almost two hours. She had the button; she wouldn’t push it. We were very fortunate as a family somebody came along and found her and rendered assistance.

Brancaccio: Well, just to be clear, why wouldn’t she push the emergency button to summon some help? She’s on the floor.

Merenbloom: She didn’t want to bother anybody. It sounds like the simplest answer. But in her words, it wasn’t that bad. In fact, she had a broken hip, a broken leg, two broken ribs. And for a lot of folks, that’s the beginning of the end. In her case, that fierce independence drove her back into her home. She made it back in just about seven weeks. But with the return to that independent living came the daily fear of, “Well, did she get out of bed this morning? Is she doing OK?” So the solution was turning to the alarm vendors, and a colleague of mine had an alarm company and I simply said to him, “I need to raid your warehouse.” We put contact sensors that are typically used to identify when a door has opened to let us know when a refrigerator had opened or closed, or when a medicine cabinet was being used. And through the collection of that information, that data, we were able to get a picture of grandma’s life and whether she was doing OK.

Brancaccio: But here’s my question, Paul: you hope that the tech doesn’t make family members more remote. I mean, an actual human being should get over there once in a while and not use your system to not go over there.

Merenbloom: Absolutely. You want to visit in person. One of the things that we’re looking at on the whole is making a difference in wellness, simple compliance. “Did you take your medication today?” “Did you drink?” “Did you eat?” What did you have for lunch? And in turn, the family members become more engaged. They don’t have to nag somebody. “Hey, what did you eat this morning?” Or, “did you take your medication?”

Brancaccio: And, you know, this works in the home and this means it’s for people who want to stick it out in the home and not go to, for instance, assisted living or something.

Merenbloom: “Aging in place” is the term that’s been coined, but it’s really continuing just to live the way you want to live.