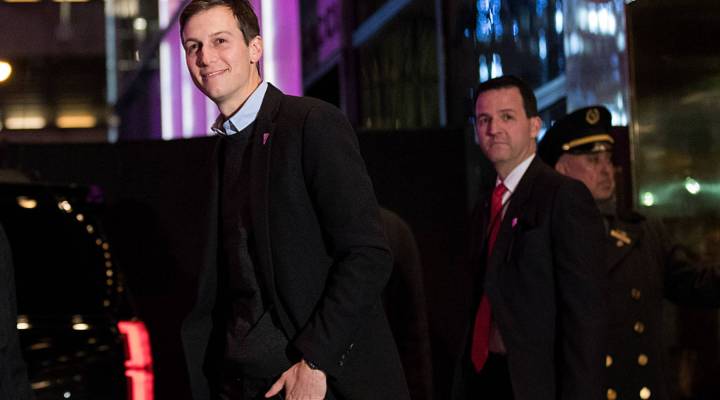 Donald Trump has tapped his son-in-law, Jared Kushner, to become a senior White House adviser. Kushner will tackle trade and middle east policy, among other issues, in the role.

To avoid potential conflicts of interest, Kushner plans to sell or put into cold storage many of his businesses. According to Kushner’s lawyer Jamie Gorelick, he’s selling his stake in his family’s building on Fifth Avenue, his piece of an investment firm called Thrive Capital, and his part of the New York Observer. All of Kushner’s foreign holdings will also go.

But the fact remains that Kushner is the husband of the next president’s daughter. There’s a federal law against nepotism that was signed by President Lyndon B. Johnson, which some say served as a jab at Robert F. Kennedy, who became U.S. Attorney General when his brother, John F. Kennedy, was president.

Historian Joshua Zeitz, a Politico contributor who just finished a book on the Johnson administration, joined us to talk about the history of this law and whether there are any loopholes.

Joshua Zeitz: LBJ had nursed a kind of fiery hatred of Bobby Kennedy going back to the late ’50s, but it had intensified by 1967. He was convinced that Bobby intended to challenge him for the nomination in 1968, or at the very least run in 1972, and he wanted to prevent the Kennedys from ever again repeating the situation whereby John Kennedy appointed his younger brother to the post of attorney general or any sort of powerful post like that.

David Brancaccio: And we should point out the feeling seems to have been mutual.

Zeitz: Yes. There’s actually a terrific book written about their relationship called “Mutual Contempt” and I think that that very nicely encapsulates the relationship. I mean, Bobby Kennedy considered LBJ a kind of a crude figure who wasn’t worthy of his brother’s seat, his brother’s chair and Johnson considered Bobby Kennedy a ruthless and kind of conniving schemer who was posturing as a liberal, when in fact his liberal credentials were far better than Bobby Kennedy’s — at least in Johnson’s mind.

Brancaccio: And relevant to the topic at hand, this anti-nepotism law — there are many who don’t think Robert Kennedy was ready for this position of attorney general when his brother handed it to him.

Zeitz: Oh, I think there’s no doubt about it. I mean, in retrospect it’s very difficult to justify that appointment. I mean, Bobby Kennedy had served for a handful of years as a Senate staff member on two Senate staff committees in the late 1950s. He had never practiced law. He had never been a prosecutor. He had never served in elective office and he was roughly 35 years old when John Kennedy made him attorney general. In fact, Jack Kennedy tried to deflect some of the very, you know, sort of deserved criticism by publicly quipping that he wanted to make his brother attorney general so that he would get a little practice at the law. And Bobby was furious that he had made this joke at his expense. But, you know, looking back in hindsight, there was there was no way to justify that appointment and today I think it would be considered laughable and probably wouldn’t even merit Senate confirmation.

Brancaccio: All right, so Lyndon Johnson signs this thing into law, but it’s Congress that passes the anti-nepotism law. But it was driven by an attempt, right, to solve the problem.

Zeitz: Absolutely. I don’t think that the members of Congress who passed the law necessarily had Bobby Kennedy in mind exclusively. And at the time, it bears remembering that he was a senator from New York, so he was a member of Congress and voted for the law. But it was a fairly common practice in those days for members of Congress, for instance, to put spouses — usually wives or adult children — on their payrolls. That was one of the abuses that this act was meant to stop, and it was also meant to, you know, stop more common abuses of public employment roles whereby government administrators would put family members on the payroll in different offices. So I think it had broad applications, but certainly for Lyndon Johnson it was meant to stop the Kennedys from ever again practicing the kind of nepotism they did in the early 1960s, and certainly from members of Congress. It was meant to stop the practice whereby high ranking government officials brought their family members into the government employ.

Brancaccio: Federal law. But that law, did you see, may or may not have a loophole. When Bill and Hillary Clinton wanted Mrs. Clinton to guide health care policy reform back then, two federal judges agreed the anti-nepotism law doesn’t apply to White House advisers, which sounds like Mr. Kushner’s loophole right there.

Zeitz: That could be the loophole, or potentially he doesn’t take a salary because some of the intent of the law was clearly to end that kind of nepotism that was, you know, squarely used to sort of absorb public funds. Which I don’t think was the case, obviously, for Bobby Kennedy, who was very wealthy and didn’t need the salary. So he might very well have that loophole. I think there’s there’s clearly a distinction to be made between somebody who serves on a government advisory board. You know, Lyndon Johnson, for instance, established dozens of advisory commissions that helped create Great Society legislation. Bill Moyers and Joe Califano actually ran that from the White House and they staff those commissions with professors and outside experts and think tank personnel. That’s probably closer to what Hillary Clinton did in 1993, than to say give Jared Kushner a formal role as a White House counselor or aide with a security clearance and to have him sit in on domestic and foreign policy meetings. There seems to me to be a distinction between those two, but that’s a historical distinction. It may not be a legal distinction. They might have found the way out there.

Zeitz: He could very well. Much like Bobby Kennedy, he’s the son of a very rich man who led a very charmed existence, so you never know where this takes him.