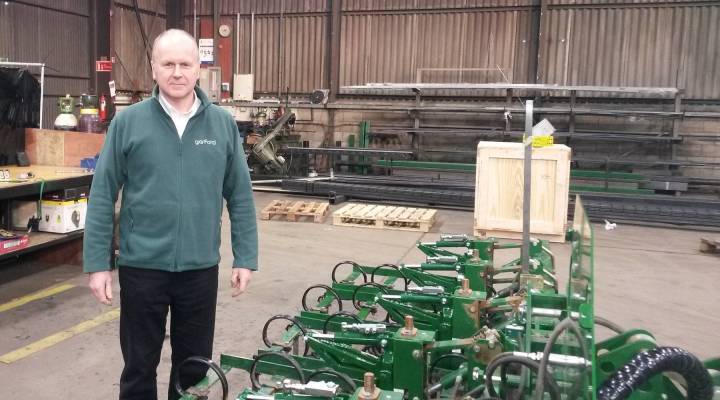 Poskitt Carrots prides itself on its fresh, local produce: 70,000 tons of the  orange vegetable are  harvested  every  year from a  big  family  farm in north Yorkshire. But many of the staff are not home-grown. Take the receptionist, Aiste Lukociute; she’s a Lithuanian who’s worked at Poskitts for eight years and most of her fellow workers are European Union migrants, too, hailing from Latvia, Estonia and Poland. Their boss Guy Poskitt says the migrants have played  a key part in the success of Poskitt Carrots.

“We’ve got some good local workers but just not enough of them.” he told Marketplace. “ We couldn’t run our business without migrant workers. They’re loyal and reliable and they’re hardworking. Why have we got a Lithuanian receptionist? Because we struggled to find a local receptionist who would start at 7.30 in the morning.”

But Poskitt is now struggling to attract enough EU migrants. The supply of willing workers from Eastern Europe to staff his production line and run the office has dwindled since the vote for Brexit for  two main reasons. Some potential migrants have interpreted the vote as anti-immigration and have decided they would not be welcome in Britain. And at the same time, the sharp fall in the value of the British pound has cut the value of any remittances the migrants might want to send home by 10 or 15 percent and that has reduced the UK’s attractiveness as a destination for work.

To combat labor shortages, Guy Poskitt has resorted to technology. He’s just invested $2.8 million in an automatic carrot grading machine which sorts 20,000 carrots an hour and does the work of  22 people.

“We have to look further at automation in order to replace labor.” he said. “We’re very concerned that after Brexit happens and the free movement of EU citizens into the UK comes to an end,  we won’t have enough people to do the work in this company.”

Some companies will benefit from this anxiety. Garford’s Farm Machinery makes agricultural automation equipment, including a device called “ Robo Crop”,  which uses video cameras and computers to remove weeds automatically from crop fields. Philip Garford claims that his device will replace 30 farm laborers and will get a boost from Brexit..

“Farmers are indicating that they are thinking ahead and thinking about the potential loss of migrant workers.” he said.

More than 190,000 EU migrants arrive in Britain every year. If many of them stay away after Brexit and many more companies are forced to automate, some economists say that could be beneficial. Matthew Whittaker of  the Resolution Foundation, a think tank, says  this  would raise the country’s output per head and tackle the perennial British problem of low productivity.

“From the purely economic perspective if we can boost productivity then the Brexit vote will have some positive impact.” Whittaker said.

But unlike Poskitt’s Carrots and many other farm enterprises, some businesses that are heavily dependent on migrant labor, like domestic services and the hotel trade, will find it much harder  to automate. For them, Brexit may prove more stick than carrot.