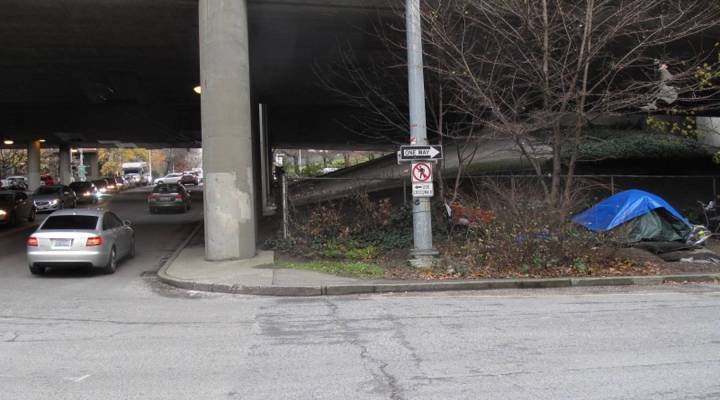 COPY
A tent under Interstate 5 in downtown Seattle, where homeless people seek shelter, a block away from City Hall. Anna Boiko-Weyrauch

A tent under Interstate 5 in downtown Seattle, where homeless people seek shelter, a block away from City Hall. Anna Boiko-Weyrauch
Listen Now

Dave Tomson and his dog Dennis slept between cardboard walls under Interstate 5 in Seattle one night recently. Tomson is a block away from city hall – in fact you can see it from the corner.

He picked this spot so he could stay dry.

“It was raining and I’m not made out of sugar, but I don’t like to be cold and wet,” Tomson said. “Call me crazy.”

Tomson is homeless, like more than 4,000 other people in the city. He’s lived on the streets for five years after he went to jail and lost his job, he said.

“I wasn’t able to get back into work because I didn’t have a place to live,” Tomson said.

With rent running around $900 a month on the low end in Seattle, it’s more than he can afford, he said.

Rents in Seattle are rising at some of the fastest rates in the nation, according to data from Zillow, leaving many out in the cold. Now the city is using a new approach to fund affordable housing: issuing bonds. This time, instead of funding parking meters and police stations, the bond money will help provide shelter to people who need it.

“We have a real interest in Seattle in trying to bring more people inside,” she said.

Other places across the country with tight housing markets are also looking to bonds to fund housing. Voters in Baltimore, Silicon Valley, and Portland, Oregon approved ballot measures in November.

This will be the first time since the 1980s Seattle will use debt to pay for housing.

Usually, the city issues bonds to fund infrastructure like the electric and sewer systems, and levies property taxes to pay for housing development.

But those projects take at least three years to build, after they’re approved, Herbold said.

“Our hope is to be able to do something much more quickly that doesn’t have these same sort of constraints,” she said.

The city is looking at a few different ideas to add more housing units. One is to put modular housing – which looks like shipping containers – on city-owned property to provide housing for chronically homeless people. Another idea is that the city would pay for seismic upgrades to buildings in exchange for making some of the units in those buildings more affordable.

The city needs to decide which projects to fund, and then issue the bonds in April, for anywhere from 250 to 500 new units.