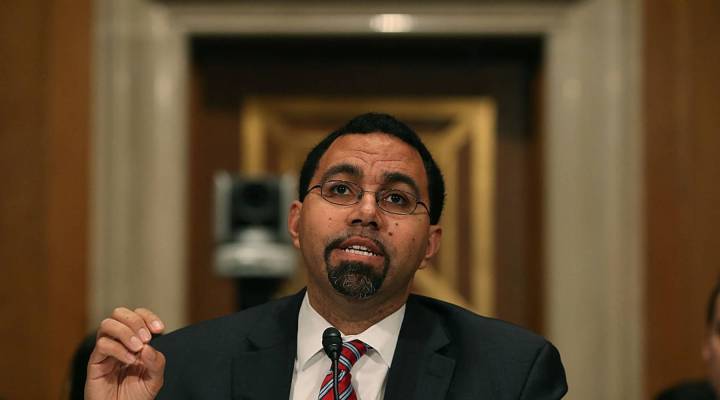 In just two weeks, we will have a new president. And along with a new commander-in-chief comes a series of new cabinet members. But before we transition, let’s take a look back.

The outgoing Secretary of Education John King, spoke to Marketplace host Lizzie O’Leary about his time in the department. Below is a transcript that was edited for clarity and brevity.

Lizzie O’Leary: You are on your way out the door. And I guess my first question for you comes actually from educators who have talked to our education correspondent now that the Common Core is in place. How long, they wonder, should it take before they start to see results?

Secretary John King: Well you know, it certainly varied across the country. There are places like Washington D.C., it’s seen very significant gains in academic performance and graduation rates. States like Tennessee and Louisiana where they’re seeing promising early gains as a result of their work to support teachers around college and career ready standards. We’ve got more students going on to college. A million more African-American and Latino students going on to college.

O’Leary: All of that sounds great, and I know that the Office of Civil rights within the department has been a big priority for you. And yet we know 80 percent of Latino students and 74 percent of black students attend majority nonwhite schools. How do we have an equitable society and economy when schools in the U.S. are so segregated still?

King: You’re exactly right. You know, we’re more than 60 years past Brown vs. Board of Education and we actually have communities that are more segregated by race and by class today than they were 10 or 20 years ago. And I think, unfortunately, sometimes people think this is something that can’t be changed. But in fact, this is a result of choices that are made around education policy and housing policy. What’s promising is that there are more than 100 communities around the country that are engaged in voluntary school diversity initiatives. Places like Louisville, Kentucky where they are being very intentional in their school assignment strategies and in their work on housing to ensure that their schools are diverse.

O’Leary: I want to shift to higher education. There are thousands of students who went to schools, for-profit schools like Corinthian and others, who are still trying to get debt relief from the department. What happens to them on Jan. 20?

King: We continue to work on reviewing the debt relief claims that we’ve received and we’re making progress and our work through those. But that work will need to continue into the next administration. That’s not a partisan issue, that’s not a question of one administration versus another. That’s a right that students have. And the next administration will have a responsibility to keep going through those claims – reviewing them – and where students have been wronged, ensuring that they get the relief they deserve.

O’Leary: I know you haven’t been in the job for a long time but I wonder what’s your biggest regret? What do you wish you’d gotten done?

King: You know, two things. You raise the issue of school diversity. The president made a proposal — $120 million — for a grant program called “Stronger Together” that would have incentivized and supported local voluntary efforts to improve school diversity. And we weren’t able to persuade Congress to make that investment. The other is around early childhood. We know that high quality early education has a 8-1, 9-1 return on investment. We’ve invested, through this administration, in the preschool development grants program, which is expanding access to high quality pre-K in 18 states. Tens of thousands of new seats, but it’s not enough. Only about 40 percent of students are on public preschool programs. We have a lot more work to do to get to universal access for low- and middle-income students. The president proposed something called “Preschool for All.” Again we weren’t able to persuade Congress yet to make that investment. Public education is fundamental to the long term success not only of our economy, but of our democracy. And it’s good for the country to see investment in public education and continuous improvement in public education.