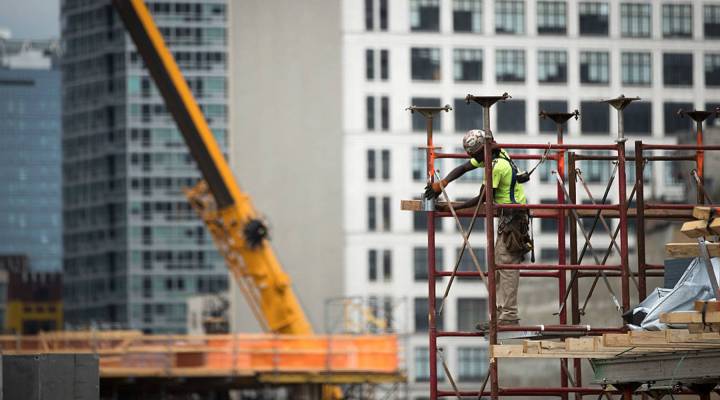 COPY
A construction laborer works on the site of a new residential building in the Hudson Yards development, Aug. 16, 2016 in New York City. Drew Angerer/Getty Images

The U.S. economy added fewer jobs than economists were expecting in December, but there was some good news: wages are finally on the rise.

Wages last month were up 2.9 percent over the past year, which pencils out to a raise, on average, of about $0.75 an hour.

One reason for that may be a tightening job market. Companies are finding it harder to attract highly skilled workers without raising wages. But, wage increases can lead to inflation if companies are forced to raise their prices, so they can keep giving their employees pay raises.

Elise Gould at the Economic Policy Institute said there’s no sign that wage growth is putting any worrisome upward pressure on inflation at the moment. But if there’s a hint wages are starting to push prices up, inflation hawks will be clamoring for the Federal Reserve to hike interest rates more aggressively, to cool things down.

Still, the increase in wages is likely welcome news to many Americans. A recent report from Glassdoor shows how these wage increases are playing out in some of the larger metro areas in the U.S.:

Chicago’s biotech and pharmaceuticals industry last month had one of the highest median base pay — $60,522 — in the city.

Median base pay across all industries: $56,635
The metro area’s wages are rising the fastest compared to other areas. In December, the growth rate was 4 percent, compared to 3.1 percent pay growth last month.

The energy and utilities sector in San Francisco had a median base pay of $73,304 in December.

Median base pay across all industries: $65,379
San Francisco’s pay growth rate was down 4 percent from last month, falling to 3.7 percent for December.

The aerospace and defense industry in Los Angeles had a median base pay of $63,901 in December.

Median base pay across all industries: $59,260
Los Angeles experienced 3.4 percent year-over-year growth for wages in December, and the figure was also down from last month — when it was 4.3 percent.

In New York City, the median base pay for the construction industry was $60,755 last month.

Median base pay across all industries: $60,448
The New York City metro area experienced 2.9 percent growth for wages in December, down from 3.3 percent last month.

The aerospace and defense industry in Houston had a median base pay of $59,687 in December.

Median base pay across all industries: $54,836
Houston had the slowest growth. In December, wages grew 1.9 percent, and this was actually an improvement from the month before when it was at 1 percent.