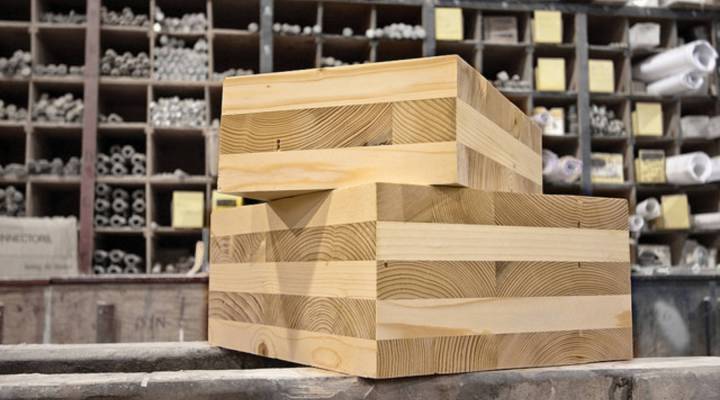 It’s pretty rare that we get new techniques in construction. In fact, the last major one came in the 19th century, when steel replaced iron framing and birthed the modern skyscraper. Today, there’s a new technique that has the potential to change the way we look at buildings, and transform our cities.

Picture this: a skyscraper made of wood, made out cross-laminated timber, or CLT. Justin Davidson, architecture critic for the New York Magazine, wrote about these buildings in his article, “Imagining a Wooden Skyline.” He talked to Marketplace host Lizzie O’Leary about how CLT works and why it may be an ideal alternative to steel. Below is a transcript that was edited for clarity and brevity.

Justin Davidson: It’s really about taking relatively small units of wood when they’re sawn boards, but you’re then gluing them together into these massive units. So the general term for this is mass timber. Mass timber has two basic components: one is CLT, cross laminated timber, which is these huge boards essentially made up of smaller boards.

Lizzie O’Leary: How big are we talking about?

Davidson: They could be eight to 12 inches thick. So that’s a thick piece of super plywood — 10 feet wide, 40 feet long, so one of those would give you a lane of a bowling alley.

O’Leary: So you take those and then, you use the phrase in here, it’s almost like a really kind of high tech Amish barn raising.

Davidson: The great advantage to it is that you can manipulate it in a factory using a computer controlled milling and do all the openings that you need, cut out the windows, cut channels and pre-designed and then pre-manufacture these units that can then be quickly assembled on site. This is a simplified way of putting it, but you’re essentially clipping it together like a kit.

O’Leary: You came here to our office on Third Avenue in New York City walking through a canyon of steel and glass buildings. Why build out of wood when you could do it that way?

Davidson: So one reason is environmental. So essentially for a ton of steel, you are producing something like a ton and a half of carbon. For a ton of wood, you are warehousing carbon, so the difference in carbon emissions is actually much bigger.

O’Leary: And the cutting down of trees?

Davidson: You’re not cutting old growth forest, you’re not deforesting the Amazon. These are managed forest, so you’re planting the trees, you’re letting them grow 10, 15 years and then you harvest them. And actually one theory is that essentially this is self-sustaining and self capitalizing because if there’s a demand for construction grade wood in the United States and in Europe and around the world, what you’re doing is pumping money into the forestry business.

O’Leary: One thing that immediately jumps into my mind, and you mentioned this in your piece, is there was a time in America certainly around the turn of the century where we built everything out of wood and cities like San Francisco went up in flames.

Davidson: So if you think about making a fire in your fireplace you don’t put a great big log on the fireplace and then hold a match to it. What you do is you build up the fire using smaller kindling. So essentially CLT is like that big log. It will burn, as well every other material, but it will burn slowly and in a predictable way, essentially giving residents time to escape and firefighters time to respond. And they’ve done a lot of tests with this. I mean this is a well-tested material. Tested for earthquakes. It has a fire resistance that’s equivalent to concrete and steel.

O’Leary: What’s the biggest barrier to this becoming widespread?

Davidson: Habit. I mean, the construction industry is very routinized. So when you’re talking about changing the way you do it, there’s a startup cost that’s significant. But you also have to kind of vertically integrate the whole thing so that you are bringing the logs or the boards into a manufacturing center that is going to put in raw lumber in one end, maybe even just like tree trunks, and produce building components out the other.