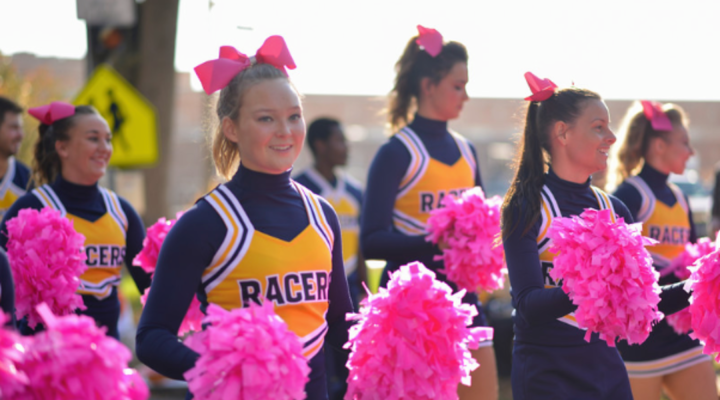 College towns may be the way to combat a slumping local economy, according to a recent report from Brookings Institution and The Wall Street Journal.

Researchers looked at 16 places where overall job growth was strong despite manufacturing employment declining more in those regions than in the U.S. overall. They found that half of those places were also homes to colleges.

Bob Davis, a senior editor at the Journal, wrote about the report’s findings in an article titled, “There’s an Antidote to America’s Long Economic Malaise: College Towns.” He joined Marketplace host Lizzie O’Leary to discuss how colleges could be the answer towns are looking for. Below is a transcript that was edited for clarity and brevity.

Lizzie O’Leary: Why don’t you describe for me what Lee County in Alabama was like in the late 1990s?

Bob Davis: Well, Lee was going through the problems that a lot of communities were — businesses there were having a hard time keeping up with Chinese imports, a number of the businesses also were being automated out of existence, and the area was starting to be full of downtowns with empty offices and not much traffic.

O’Leary: I would imagine most people listening have have been in places that have that empty feeling. What would it look like if we drove through it today?

Davis: Well, now one of the areas, Auburn [in Lee County], is a college town — a sort of thriving college town. So it’s turned around and it’s doing quite well.

O’Leary: I asked those questions because this is the thesis of this story that you wrote about areas that are booming, and it seems like it’s because they have a university there. Tell me how you found this.

Davis: I’ve done a series of stories on trying to explain the [Donald] Trump and [Bernie] Sanders phenomenon. One of the stories looked at places that were greatly impacted by Chinese imports and the number one place, the most vulnerable place, was a town called Calloway County, Kentucky. And I called there, thinking I’d find a place that just was down on its luck. But the unemployment rate was pretty good. And you looked around and you said, “Well, why is this?” And what you found was the presence of a lesser known university — Murray State — that had a good engineering and business department, and that made all the difference. But the idea that college has made a difference economically kind of stuck with me.

O’Leary: You wrote this under the banner of “an antidote to America’s economic malaise.” What is this special spark that a college town can provide to industry?

Davis: If you think about colleges as an employer — if you’re in a small city and it’s a reasonably-sized school, it might be the biggest employer in town. But in addition, what a college does is — their product is educated students. And, particularly the way the economy is moving, where skills are rewarded and education is rewarded, the colleges — if they work with the local economic development officials — can be magnets for companies looking to relocate. And also if you have professors in there that are working in the science or engineering field, you might have people who are entrepreneurs basically and want to stay in the area, and like to stay in the area and build businesses as well.

O’Leary: Do you think this is a replicable model that could be used around the U.S.? After all, it seems like one of the positives in some of these places is there’s a fairly low cost of living.

Davis: It’s not a foolproof system by any means. Just because you have a college doesn’t mean you’re going to be economically advantaged, but they become an anchor in a lot of places where there just isn’t anything else.