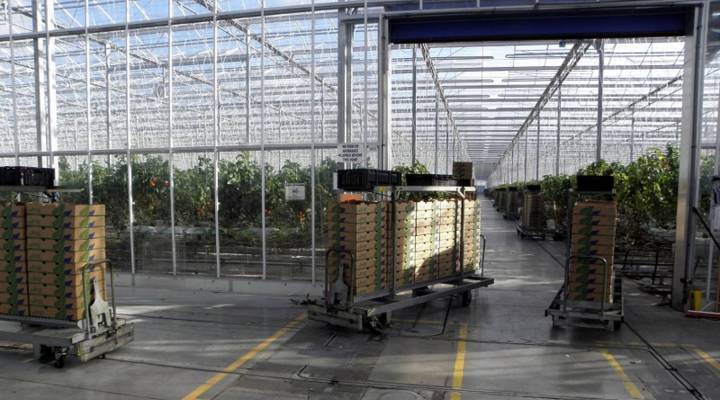 COPY
After greenhouse tomatoes are picked and loaded into boxes, they're delivered to packing stations using robotic trolleys. Karen Schaefer

Winter tomatoes used to come mostly from Mexico and California. But these days, many of those tomatoes are grown in Canada, in giant greenhouses that stretch for miles along Ontario’s Lake Erie shoreline.

Now,  new restrictions on fertilizer pollution to the lake are imposing big costs on greenhouse owners. Even so, the industry continues to grow.

Pollution controls have been put in place at Canadian greenhouses to protect Lake Erie. Too much fertilizer can feed toxic algae blooms.

Peter Quiring is showing me around his family business in Leamington, Ontario. Quiring is CEO of Nature Fresh.

Peter Quiring started his Nature Fresh greenhouse empire in 1999. He estimates he ships about 92 million tomatoes a year just about everywhere east of the Mississippi, from Newfoundland to Florida.

At 175 acres, it’s one of the biggest hydroponic greenhouses in Canada. As we walk, boxes of bright-red beefsteak tomatoes roll past on their way to the packers.

“And our snacking tomatoes will be available in stores within the next couple of weeks,” he said.

Quiring is just one of many Canadian growers here in southern Ontario near Lake Erie. All told, there are almost 3,000 acres of tomatoes, peppers and cucumbers under glass. And they generate nearly a billion dollars in sales each year.

But that much produce needs a lot of water and fertilizer. Lee Orphan is regional director of the Ontario Ministry of the Environment. All that fertilizer was causing a problem, he said.

“What we found,” said Orphan, “was the hydroponic solution, which has the nutrients, was going to the storm water pond and then when a rain event occurred it would overflow into the creek.”

When that creek flows into Lake Erie, it carries with it concentrated greenhouse nutrients. That can feed toxic algae blooms, like the one that caused a drinking water crisis in Toledo, Ohio in 2014. The ministry asked growers to fix the problem — or face penalties.

Each greenhouse complex at Nature Fresh, both in Canada and the U.S., has its own water recycling system. Used water is sterilized, nutrients are balanced and then mixed back into the watering cycle. If that fertilizer is too strong to feed back to the plants, that water is used on the farm’s outdoor growing operations.

So growers started figuring out how to stop polluting the lake. Some paid for municipal waste water treatment. Others, like Peter Quiring, improved water recycling within the greenhouse.

“We did a lot of work with better means of recycling, being able to use more of the water and the nutrient,” Quiring said.

The initial cost was hundreds of thousands of dollars, Quiring said. But now, ongoing costs for water treatment aren’t a big part of his budget. In fact, he’s building an even bigger greenhouse across the U.S. border in Ohio.