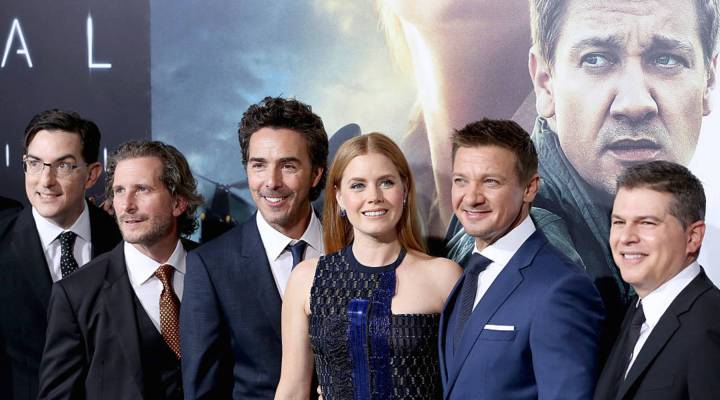 If action-packed space battle scenes are your thing, “Star Wars: Rogue One” will probably hold you over for a little while.

But there was a very different hit alien movie that opened last year. “Arrival” stars Amy Adams as linguistics professor Louise Banks, who’s tasked with figuring out how to talk with extraterrestrials after first contact is made. It’s a smart sci-fi mystery that plays with heady concepts usually reserved for a college course, not a movie theater. And the film still manages to fit in a touching story of a mother and her daughter.

The man responsible for adapting the story for the screen is Eric Heisserer, having partnered with author Ted Chiang to rework the original story.

Molly Wood spoke with Heisserer. This is a lightly-edited transcript.

Molly Wood: Whe you first read the novella on which this movie is based that you said you felt gutted and uplifted at the same time and I wanted you to know that is exactly how I felt coming out of this movie. What was it about you that said this has got to be a movie?

Eric Heisserer: Honestly, it was the way it made me feel. I thought if I can capture this feeling and make a cinematic version of the story then I can point more people toward the author Ted Chiang, who I’ve been obsessed with for a long while. And and I can I can tell a story that I haven’t seen very often in film.

Wood: You can tell there are many difficult science concepts in this movie. The primary one is this idea of linguistic relativity. Can you give us a quick explainer?

Heisserer: I can tell you that it is a somewhat controversial idea in the linguistics community and Ted Chiang takes it into a sort of a science fiction territory where he goes. But it’s about the fact that when you immerse yourself in a foreign language you really kind of rewrite your brain and you can dream or even sort of — it can change your view of the world. And I had a personal experience with this when I was a child growing up. My father was a classics professor for like 30 years and he was constantly teaching himself new languages. In fact he would make his own little flashcards, and to learn a new language he would brush up on another one so he’d have like Aramaic on one side of the card in German for the translation on the other. And he was also just the absolute stereotypical absent-minded professor. I never know what era he was in. I would go up to him like, “Are in ancient Greece right now dad because I need you right here for dinner.”

Wood: I’m actually seeing how this all drew you to this novella. We’re getting into therapy territory here.

Heisserer: Yeah, exactly. He had this replica of the Rosetta Stone in his home office. The idea of, like, three different languages and how they’re translated always fascinated me. But I remember asking him a question at one point in time and I interrupted a language lesson he was teaching himself, and he looked at me and blinked and it took him a good ten seconds to switch back to English, and that made me wonder: How is he thinking? What language is he natively thinking in now? And I didn’t realize until I ran into this story years and years later that it’s a real thing. So I latched onto it.

Wood: This is the film I understand was it was very difficult to get made. So tell us about that journey and why you got so many nos at first.

Heisserer: Well I think I had a lot of nos at first because it’s an outlier. There’s an increasing need for studios to produce only franchise material. I can tell you if someone came up to any studio now with just a screenplay or a story idea for “Interstellar” or “Gravity” or “The Martian,” they wouldn’t go anywhere. In order to make these kind of films you need prestige directors and stars that can signal to the studio “This isn’t a loss leader. This will actually go somewhere.” Even if it’s not a franchise piece, and particularly if it doesn’t have a male lead, they get worried.

Wood: Amy Adams has said that this film is very much about a mother telling the story of her daughter. Without that do you think the movie would have anywhere near as much weight?

Heisserer: No, absolutely not. That’s really what drew me to it. The story in my opinion and certainly hopefully the film adaptation is a love letter to mothers. It’s like a giant thank you note.

Wood: And yet, perfectly crafted to just stab us in the heart. I read that you had identified Amy Adams from the get go. What is it about her?

Heisserer: I think it’s that I can see what she’s thinking when she’s acting. I can tell what’s something’s going on in her brain just through her eyes. And I find that is an unusual trait in an actress.

Heisserer: I learned that there often an invisible bias that’s always present when it comes to communication, and more and more people seem to try and customize the channels for communication in a way that it sort of reinforces that bias. And we are really terrible at communicating.