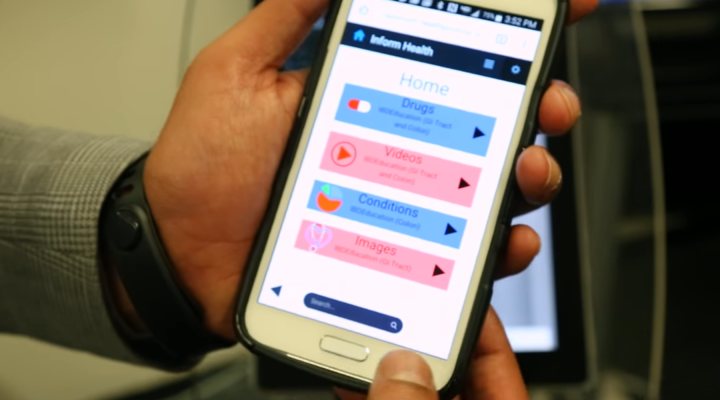 The trick is distinguishing the digital tools that improve care from the ones that have little impact or can even can harm people.

A project out of Mt. Sinai Health System in New York City has developed an app to offer that service.

“Prescription Universe” evaluates and ranks apps it considers among the safest and most valuable.

Physicians can then prescribe the app, and make it easy for the patient to download the prescription.

There’s a feedback channel so the doctor can monitor patient data.

A report from the consultancy firm Accenture shows physicians at two-thirds of the nation’s largest hospitals now want to prescribe apps, but only a tiny fraction of patients end up using them.

Atreja, a gastroenterologist, believes apps can both improve health and save money.

It’s worked for his patient 32-year old Laura Webb, one of Atreja’s patients who for a decade has wrestled with Crohn’s Disease, an inflammatory bowel disease.

“I’ve been hospitalized so often,” Webb said. “I’ve been in a coma. I’ve had multiple blood transfusions. I had to learn how to walk again. I even lost my hair twice.”

Webb doesn’t want to go back there.

Webb said a simple monitoring app that tracks her symptoms in real time has helped her and Atreja avoid her Crohn’s spiraling out of control again.

“Having something like this, where you have connectivity with them and you know they are going to see what is going on with you is fantastic,” she said. “Otherwise, what am I doing, faxing, calling, and emailing hoping someone will get back to me. I really sort of need something more.”

Prescribing and “taking” apps have yet to take off because “there are so many apps. The doctor’s don’t know which to choose,” Atreja said.

Prescription Universe is one of several companies looking to make it easier for providers to prescribe apps to their patients.

The app has proven so popular at Mt. Sinai, doctors are prescribing as many as 300 apps a day.

“What they are essentially building is a platform, and the platform potentially solves a problem for doctors and patients,” said Dr. Bob Wachter, author of the book “The Digital Doctor.”

But Wachter recommends a dose of health skepticism.

He said apps often lack the scientific evidence and rigor for us to know if they work and can improve the quality of our lives.

Products like Rx Universe or its competitors may offer the illusion “without quality data backing it up,” he said.

Ultimately health apps, he said, like any serious medical device, must have the data to prove its worth.