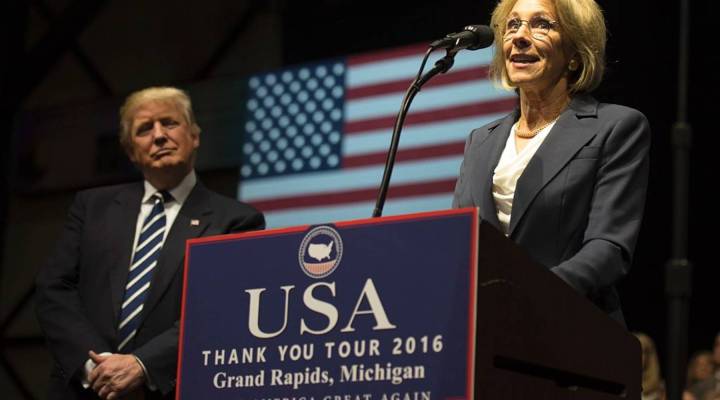 Most students are still on winter break and not thinking about school. But for just about everyone else in education now is the time to prepare for the New Year.

And there could be some big changes coming in 2017. President-elect Donald Trump has signaled he’d like to shake things up in education but we don’t have many details yet.

Lizzie O’Leary spoke with Marketplace senior education correspondent Amy Scott for a look at the big education stories she’ll be watching in 2017.

I think one of the big things we’ll be watching is the Every Students Succeeds Act, which Congress passed actually at the end of last year. And it replaced the federal education law No Child Left Behind that had been in place for more than a decade. So this year there’s going to be a lot of work to implement that law. And one of the things it does is gives states more power to decide how they hold school accountable. States have to come up with at least one non-academic indicator. So, things like access to advanced coursework, attendance, school climate and the idea is is supposed to be a more fair measure of whether schools are doing a good job.

On what we know about the incoming Trump administration’s education priorities:

Well he [Donald Trump] didn’t give a lot of details on the campaign trail, you know, education barely came up. But we do have some hints… During the campaign Trump proposed a $20 billion program that would give grants to states that would then allow low income students to use the money to attend the school of their family’s choice. Including private and religious schools. So basically a voucher program.

What about higher education?

Many are expecting some of the Obama administration regulations targeting for-profit colleges to get scaled back. But others that I’ve talked to say we’re not going to go back to the bad old days of this aggressive recruiting and enrolling students who weren’t prepared to succeed because the market has just changed. There are just fewer people enrolling in college and especially at for-profit colleges, and partly because of that crackdown.