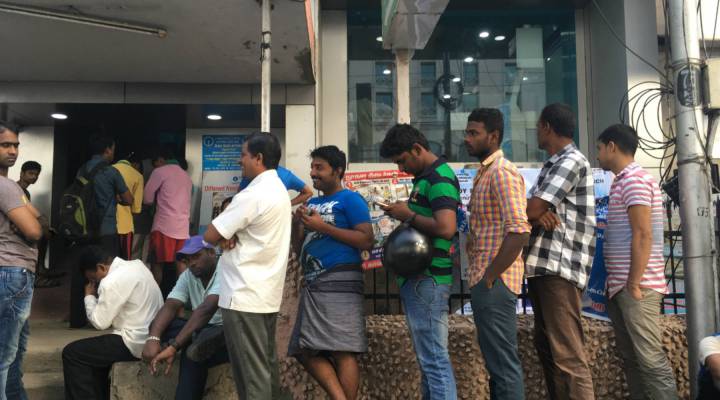 COPY
Customers lining up at a bank in India. Sally Herships/Marketplace

Customers lining up at a bank in India. Sally Herships/Marketplace
Listen Now

In India, today is the last day to deposit 500 and 1,000 rupee notes in the bank. Afterwards, they’ll become worthless pieces of paper.

Those might sound like high numbers, but in India they’re pretty common denominations — equivalent to around $7 and $14, respectively.

It’s part of a plan that Prime Minister Narendra Modi announced in early November to cut down on “black money,” cash some Indians are hoarding to avoid paying taxes on. But now that plan is causing a major cash shortage.

Marketplace’s Sally Herships, who recently visited the country, joined us to talk about India’s currency issues.

On how Indians are coping:

There is cash. If you look around long enough, you will find some ATMs that have money. But there is a catch. First, you have to stand in line, which I did. And next, there’s a limit to how much money you can take out. In November the government set the limit at about 2,500 rupees. But the real catch is that when you do finally find a cash machine and take out your money, you only get it in giant bills.

An ATM in Bangalore.

On how businesses are reacting:

Everywhere you go, you see signs up. We had dinner one night at a restaurant, and it had a sign, and it said  if you wanted change for a 2,000 rupee note — which is about 30 bucks —  you had to spend a minimum of 500 rupees. So imagine you want to buy a bottle of water. A bottle of water is about 10 rupees and all you have are these 2,000 rupee notes. It’s really hard for businesses when they don’t have change.

Many small businesses in India are cash-based.

On the country’s relationship with credit cards:

When it comes to credit cards, India is just not like the United States. Most transactions there are done in cash. India’s population is about 1.25 billion. And according to the Reserve bank of India, the total number of debit cards from this summer  is a little over 700 million, which means that hundreds and hundreds and hundreds of millions of Indians still don’t have a way to access electronic cash.

Another out-of-cash bank in Bangalore.

On trying to get by in the country:

We got lucky. I was staying with a family friend.  Their family runs a daycare business, and their clients pay them in small bills. I did almost get stranded once in Bangalore because all we had was a 2,000 rupee note, no way to call a taxi and no change. But we lucked out and found a taxi driver with change. Bottom line: the government says its plan is working – that by requiring Indians to trade in their old money for new, consumers are being forced to declare untaxed earnings. But anecdotally, from a lot of Indians, this doesn’t seem to be the case.