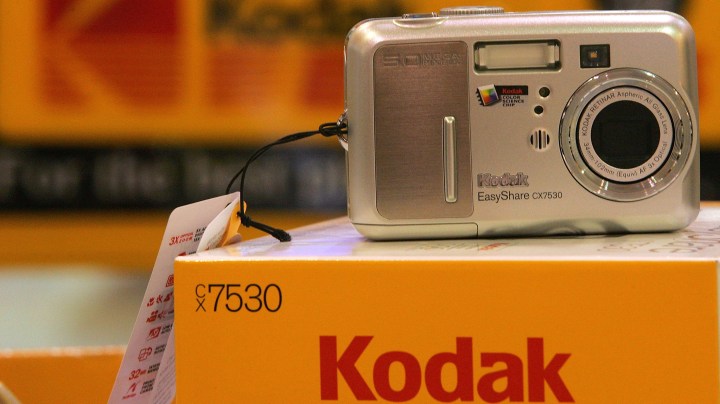 COPY
A Kodak digital camera in 2004. Robert Cianflone/Getty Images
Brought to You By

How many pictures do you think you took over the holidays? Or will take on New Year’s Eve? Smart phones and digital cameras have made us all photographers now, but there was a time when the concept of digital cameras wasn’t only futuristic, it also threatened an entire photography industry.

For the latest installment of our series “Brought to You By,” former Kodak employee Steve Sasson tells us the story of how he came up with the digital camera, and why Kodak wasn’t interested in investing:

I worked for Eastman Kodak Company for over 35 years. I began in July of 1973. I was a junior engineer. My supervisor said, ‘We’ve got a filler job for you. There’s a new type of imaging device called a charged couple device imager; we want someone look at one of these and see if we could do anything useful with it.’

Our conversation probably lasted about 30 seconds, it was nothing.

Most of the parts I used to build it, I stole from around the factory. Digital volt meters and chips, digital tape cassette, prototype box, it looks like an erector set with a blue box on top with a lens stuck on top. And I would output to a television set. We took our first full images in December of 1975.

I folded the camera up, and I walked down a hallway, and there was a young lab technician, her name was Joy. I asked her, ‘Could I take a snapshot of you?’ She said, ‘sure, whatever.’ The tape started to move, that’s how I know I made a picture. I popped it out of the tape player, put it into the playback system. It was quite a moment, because this crazy thing actually worked. Up popped the image. We could see her black hair and a white background, but her face was complete static, completely unrecognizable. Jim and I were overjoyed at what we saw, because we knew so many reasons why we wouldn’t see anything at all.

Joy had followed us in, she looked at the picture and she said, ‘Needs work.’

We filed for a patent, and the first patent for a digital camera was granted in 1978. U.S. Patent 5016107. We started to show it to people at Kodak. Then, it became more interesting.

The first patent for a digital camera.

I thought they’d spend all their time asking me how did I get this to work. They didn’t ask me any of the hows, they asked me, ‘Why? Why would anyone want to do this?’

Very few people ever managed to successfully commercialize photographic film, very difficult stuff to make. Once you’ve made that investment, the profit was considerable. They ask you, ‘Show me the money.’ It was a pretty hard sell.