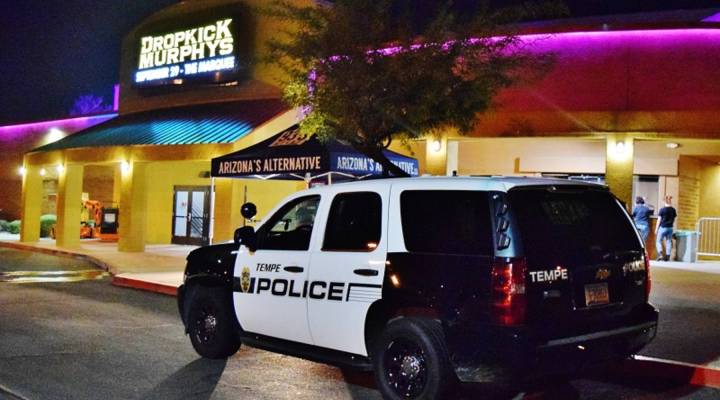 At the Marquee Theatre in Tempe, Arizona, Sgt. Steve Carbajal looks on as people go through security before a concert.

“People come and have a good time,” Carbajal said. “It’s a smaller venue. It’s a different vibe. Some kind of like, not your necessarily mainstream bands, ya know?”

Carbajal works off-duty security to supplement his day job as an officer with the Tempe Police Department. He makes $60 an hour, and he said it’s a pretty easy-going crowd.

Carbajal got the job through an off-duty coordinator at the Tempe Police Department. Sgt. Josie Montenegro points to a screen in her office at police headquarters, where she has logged in to look at what’s available.

“Here’s the jobs,” she said, scrolling down a long spreadsheet. “So for Monday, there’s three jobs posted here.”

Montenegro said the off-duty work is so popular that the department doles out the jobs with a lottery system. It’s like a bonus or an added incentive for officers, “especially if they have a young family, or, you know, they want to buy a house,” she said.

A recent survey  of policing in America shows hundreds of thousands of officers put in millions of hours every year moonlighting. But working part time, private, off-duty security jobs can complicate what it means to be a full-time public servant.

Regardless of what they use the money for, a lot of cops take advantage of the opportunity for extra income.

“As many as 300,000 may be putting in more than 43 million hours working for private employers every year,” said Seth Stoughton, a University of South Carolina legal scholar who conducted the survey of off-duty police work.

“You have someone who was hired and trained and equipped with taxpayer dollars,” he said.

“The lines would be gray between ‘Are you acting in your responsibility, in your role as a full-time law enforcement officer, or as a security officer of a, you know, private interest?’” Stichter said.

But Stoughton found the majority of departments allow moonlighting.

“It raises a pretty fundamental question about what policing is. Is it public? Is it private? Or is it some mix of the two?” He said for many officers, the answer depends on what day it is and who’s paying.